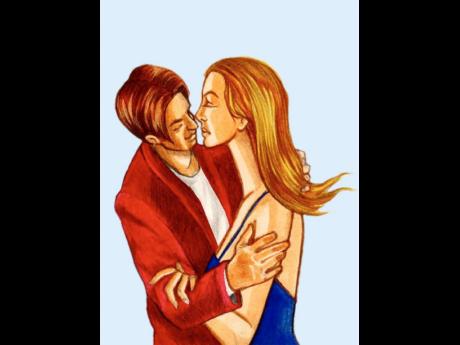 Matthew woke up with a start. He stared around the room blearily and for a moment he couldn't figure out where he was. Then Laila shifted beside him and his mind cleared, memories of the day before clicking together like puzzle pieces. He rubbed his hands over his face and leaned back against the bed. He felt no regret, only resignation.

Crooking an arm under his head, he turned over to face Laila and smiled when he saw the sheet strategically covering her face.

"Mm-hmm," from behind the sheet.

He laughed. "Planning to come out anytime soon?"

She shook her head vigorously.

Matthew ran his eyes down the hint of curves under the thin sheet. He decided to get up before he did something that would only get him into more trouble, if that were possible.

"I'll be back in a sec," he said, surreptitiously picking up his blackberry from the end table before going into the bathroom.

After he shut the door behind him, Laila sat up and ran her hands over her face quickly. She glanced at her phone and was shocked to see that it was almost 8 p.m. Had they really slept for three hours? She reached into the handbag that was laying on the floor next to the bed and pulled out a small comb, dragging it through her hair a few times. Checking the mirror, she grimaced. There wasn't much she could do without a blow dryer and some hair polish. She decided to pin it up instead. Matthew had always liked it when her hair was pinned up, away from her face. He used to trace her neck with one finger and press light kisses along her jaw line. Of course, that was a long time ago. They had grown up, moved on. She had got engaged, he had married and started a family. Not for the first, or seventh time, she wondered what she was doing there.

In the bathroom, Matthew began typing a quick message to Anita. He tried to think of something casual yet informative enough so that she didn't call him. He didn't want her to hear the deceit in his voice, and he had never been very good at lying anyway. He had always taken pride in being a responsible father and husband. His baby girl made it easy. Rhia was almost two and he couldn't even remember what his life had been like before she came into it. Every evening the one thing he looked forward to was Rhia's chubby cheeks as she beamed and threw herself at his legs the moment he stepped through the door.

Anita wasn't quite so happy to see him. Actually, there wasn't much that Anita was ever happy about. Many times he had tried to figure out how a ring and a wedding ceremony could make someone change so drastically. She used to be fun-loving, independent and funny. Now she was whiny, needy and always in a bad mood. That was no excuse for cheating on her though. Although technically, he mused, he hadn't really done anything. He had invited Laila back to his room just to hang out, that's all. Then they had ended up reminiscing about when they were younger and, before he knew it, they had fallen asleep. He wondered if multiple sexual fantasies in his head throughout the afternoon counted as cheating. Probably. He sighed and began typing.

Laila paced back and forth in the room. She needed to pee but didn't dare knock. For some reason she was afraid to face him, although they hadn't really done anything wrong. She knew she was fooling herself - Sean would be less than thrilled to find out she had spent the evening in bed with her childhood sweetheart.

It had all started very innocently. Somehow, they had both ended up in Negril for ATI weekend without their respective partners. She had no idea he was going to be there. Ever since the age of 16, when they had shared a brief but deeply intense relationship, Laila made the greatest effort to keep her distance from him. He had broken up with her because he was finishing high school and wanted to enjoy himself. "I don't want to hurt you," he had said. But Laila was hurt, and punished him by accepting a scholarship to attend school in China for three years. After that she moved to Connecticut for college. By the time she moved back he was married and she was engaged. They fell back into an easy friendship with each other, but Laila often wondered at the looks that would pass between them, and it seemed that her longing was echoed in his eyes.

And now, here they were, in the pretty little town of Negril together. She had been ignoring messages from her friends all day. She walked over to the window and looked out at the crowds of people heading to parties. She should call her fiancé, tell him she loved him, and get out of this room before she did something stupid. She sighed and pressed her forehead against the wall.

Matthew turned off his phone without thinking about what he was doing, and stepped out of the bathroom. He saw Laila standing by the window, the dim light of the moon dappled across her smooth brown shoulders. Unable to help himself, and not trying particularly hard, he stepped behind her, his breath fanning just behind her ear. Laila felt the hairs on the back of her neck rise as chills ran down her back and her skin broke out into goose pimples. Inside Matthew's head alarm bells were going off, telling him he should leave now, now, now! But he was entranced by the soft curl of her hair behind her ears, by the delicate shape of her neck, by the trio of hearts tattooed on her right shoulder. He remembered going with her to get that tattoo, remembered how she squeezed his hand tightly through the pain of the needle, and how terrified she had been to go home to her parents after. He felt a familiar longing wash over him, and the edges of past and present blurred in his mind, as he wrapped his arms around her waist and kissed her ear, her neck, her shoulders, the dip of her back between her shoulders. He couldn't believe that she still smelled the same after all these years, still felt just as soft and warm and smooth at 30 as she had when she was 16.

Laila's chest was heaving as she tried to cope with the myriad of emotions that ran through her. Not once in the four years she had been with Sean, had her body reacted like this. In her mind there was no question that she would be spending the night with Matthew, that she would have to lie to her fiancé. Guilt and other inconvenient feelings were slowly retreating under the assault of Matthew's lips. Tears began to rise unbidden in her eyes and she blinked them away quickly. She held on to his hands and pushed them away gently, so she could turn around and face him. Matthew held her gaze, his eyes luminous in the wash of the lights from outside. She reached for his face, her hands shaking. How was it possible to still feel this much, after all this time?

He caught her hands in his and kissed them. When he finally brought his lips to hers, Laila went weak with relief. And when they found themselves standing at the foot of the bed, neither of them hesitated.