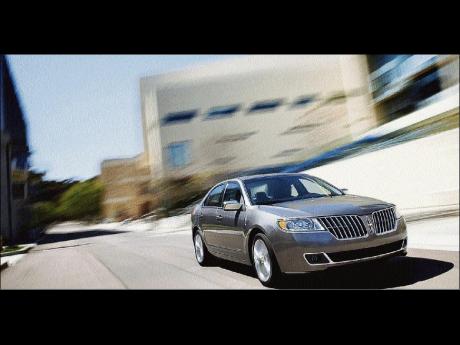 In this undated product image provided by Ford Motor Co, the Lincoln MKZ hybrid Lincoln is shown. Ford said the hybrid MKZ - to be introduced on Wednesday at the New York International Auto Show - will be the most fuel efficient sedan on the market, getting an estimated 41 miles per gallon in city driving. - AP

Ford Motor Co is entering the small market for luxury hybrids this fall with a gas-electric version of the 2011 Lincoln MKZ.

Ford says the hybrid MKZ introduced on Wednesday at the New York International Auto Show will be the most fuel-efficient luxury sedan on the market, getting an estimated 41 miles per gallon in city driving. By comparison, the Lexus HS 250h gets 35 miles per gallon.

Lexus, Cadillac and Mercedes-Benz offer luxury hybrids, but sales have been modest. Lexus' top-selling hybrid, the RX 450h wagon, had total sales of 14,464 last year, down five per cent from the year before. By comparison, sales of the non-hybrid RX 350 shot up 11 per cent to more than 93,000, according to AutoData Corp.

Rebecca Lindland, an auto analyst for IHS Global Insight, said hybrid sales still make up less than three per cent of the market, while luxury sales make up just 12 per cent.

"They're playing in a very, very small sandbox," she said.

Hybrids aren't seen as performance vehicles, which turns off many luxury buyers, Lindland said. They also send a different message some luxury buyers want to convey.

But Ford sees opportunity for growth in the luxury hybrid market. Its research shows half of large luxury sedan buyers are interested in hybrids, a number that has been growing, Felice said.

The MKZ hybrid will have the same 2.5-litre, four-cylinder engine and electric motor as the Ford Fusion hybrid. It will be able to go up to 47 miles per hour in pure electric mode.

Felice said Ford hopes the Lincoln hybrid will pull in new, younger and more affluent buyers, as the Fusion hybrid has done. Sixty-three per cent of Fusion hybrid buyers have come over from a different brand, compared with 44 per cent of regular Fusion buyers, Felice said.

Ford already has three hybrids on the market, in addition to the Fusion: the midsize Mercury Milan car and the Ford Escape and Mercury Mariner midsize sport utility vehicles.

The company plans to put out five new electric or gas-electric hybrids by 2012, including an all-electric Ford Focus compact and Transit Connect small commercial van. It has not identified the other three vehicles but says they will be two next-generation hybrids and a plug-in rechargeable hybrid.