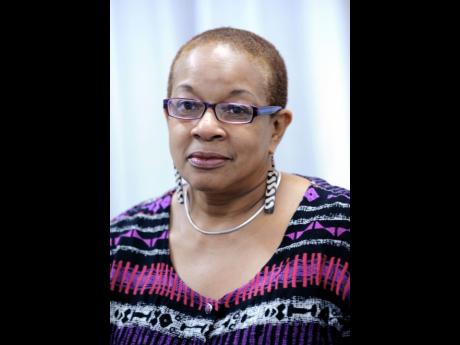 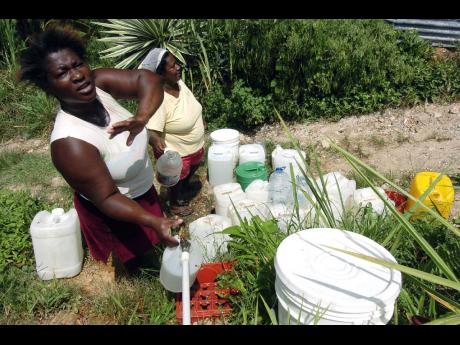 Residents of the Clarkes Hill in rural St Andrew collect water from a community standpipe. People who live in some uptown complexes may be forced to do the same. - File photo
1
2

The drought conditions affecting the capital city have had an interesting impact on people who live in those multi-unit locations known as strata corporations. Persons who had not previously acknowledged their neighbour's existence even in passing are suddenly united in the desperate search for water.

Even those who may have installed water tanks and pumps are finding that these are of little use if the National Water Commission is simply not putting water into the system. The price of a truckload of water is following the law of demand and supply and moving out of reach of even the moderately well off. Increasingly, small gatherings are appearing in uptown complexes, as people huddle around a single pipe in the strata's common area, collecting the slow trickle of water in a variety of containers. (I am sure that our downtown and rural citizens who already experience this daily reality are having a quiet laugh.)

The existence of a standpipe in an urban community was and still is taken to be a sign of the community's poverty. A standpipe meant that the residents had not yet 'moved up' to having a piped supply of water in their own homes. (In rural communities, it was a sign of progress because it meant one no longer had to make the daily trek to river or spring.) It signified an absence of privacy, and possibly an increased risk of harm, especially to young women and children who often had to bathe in full view of residents and passers-by.

Social role of the standpipe

The standpipe, however, played a valuable sociocultural role. It was one of the places where the bonds, if not of friendship, at least of common norms were forged. The disapproval of a nonconforming member was nowhere more evident than at the standpipe, where the conversation would stop abruptly and heads would turn when one approached. Conformism did not always result, but community opinion could be reinforced by more formal interventions to achieve the desired behaviour.

The standpipe was the place where news was transmitted - unfortunately sometimes resulting in disputes and fights, but often valuable information was conveyed as well. The need to access the standpipe meant that people had to 'have manners' and make an effort to get along, especially if water was not always flowing in the pipe. You needed your neighbour to keep an eye on your slowly filling bucket or pan, while you ran back inside to empty the one that was already full. The need was even greater if your hours of work meant that you were not around when water came and so someone had to fill that bucket or bottle for you.

So what you ask does this have to do with the uptown occupants of apartments and town houses? Especially since it must be acknowledged that a lot of water is wasted at standpipes and governments across the region are moving to reduce their number. It is not so much the reality of the standpipe as its symbolism that is relevant.

Long-time housing campaigner Fr Gerard McLaughlin once described a condo or strata unit owner as someone who owned a home built in the air. In an article written in 2007, Fr McLaughlin showed how the convergence of disparate interests produced this phenomenon. More and more people were looking for a way to stop pouring their hard-earned money down the drain called 'rent', and real-estate developers were seeking ways to meet the huge demand for housing in an area where space was at a premium. Voilà! The condo or strata unit - multiple dwellings occupying the same land space. The tenant has a place to call her own and the developer collects his money and moves on.

But then came the challenge of managing all these units. Unlike many naturally occurring geographic communities, despite occupying a common space, residents had very little in common and they had little basis for finding common ground to deal even with those matters which they did share, like garbage collection and the upkeep of the grounds. Unlike inner-city and low-income rural communities, the uptown dwellers were not perceived as needing public education or 'capacity building'.

There was the law, and each owner was expected to pay his fair share; but the law was a typical ass and management committee members were overtaken by the demands of trying to live at peace with their neighbours. They were reluctant to use the one option available under the law to deal with delinquent members and take them to court. As our citizens have become more alienated from each other, and the expression of a narrow individualism has become more aggressive and violent, committee members fear the verbal and physical abuse that often accompanies their efforts to collect maintenance fees and enforce the standards by which the community was expected to live.

However, these challenges did not prevent the continued explosion of this approach to meeting the demand for housing. In fact, strata properties became an attractive investment option for individuals, banks and other private companies. This only aggravated the management challenge. Resident proprietors now had to deal with absentee owners, who cared little about the inability to keep common areas swept and lit since they didn't live on the property. So, many uptown condos with their malfunctioning elevators, unpainted walls, or uncollected garbage began to look as run-down as some downtown communities.

New but not so different law

Into this dilemma came the long-awaited and much-debated revised strata legislation. If nothing else, history will record Prime Minister Bruce Golding's administration as pressing ahead with its legislative agenda. It is unfortunate, however, that history will probably also conclude that the Government did not seem to be in charge of setting its agenda. It cannot be a coincidence that the passage of the new Registration (Strata Titles) Act and the accompanying regulations suddenly 'picked up speed' as the Government tried to solve the challenge of financing its operations.

Governor General Sir Patrick Allen signed the new Strata Law on December 29, 2009. The regulations accompanying the law were passed on March 10 in the dying moments of the parliamentary year. In a country where legislation and its associated regulations can take more than a decade, how did this law, which itself had languished for some time, suddenly move through the relevant processes so quickly?

The revised strata legislation will be managed by a commission whose functions will be performed by the Real Estate Board. The board is responsible for regulating real-estate agencies and related professionals. Fees for these groups were significantly (but not punitively) increased by an act of Parliament just last week (March 17). Significantly, the Real Estate Board was one of those public-sector entities slated for removal from the government's budget. The funds that will be collected from this fee increase are not likely to be sufficient to meet its costs.

There are more than 2,000 strata corporations in Jamaica. All are expected to register with the new Strata Commission within 90 days of the coming into force of the new strata legislation. Failure to do so can attract a hefty quarter million-dollar penalty. If only 500 strata corporations pay their fees which are based on the number of units, but possibly averaging $50,000 each, one can see that the Real Estate Board/Strata Commission has an attractive new source of funds.

Of course, all of this is entirely hypothetical since the evidence is that most residential strata corporations are unable to meet their existing expenses. No one knows how they will find the funds to pay for registering with the commission. Perhaps the commercial corporations are better able to honour their obligations.

The Real Estate Board already has more work than it can manage; one wonders how it will manage the problematic strata sector. It has been said that the board/commission has no plan to expand its staff. Similarly, there have been no reports of its intention to acquire the services of mediators and community organisers, although these are the skills which are most needed to help the management of the various residential properties secure the cooperation of residents.

If the truth is told, the new strata law seems to protect the financial and public sectors' more than resident proprietors' interests. Only the former groups have the institutional resources to make effective use of the new law. Given that the drought shows no signs of breaking, perhaps residential strata corporation management committees should invest in standpipes not so much to capture the little water available, but to promote the social processes required to encourage residents' compliance with the requirements of a communal existence.

Dr Peta-Anne Baker is the coordinator of the Social Work Programme at the University of the West Indies, Mona. She may be contacted at pab.ja2009@gmail.com, or send feedback to columns@gleanerjm.com