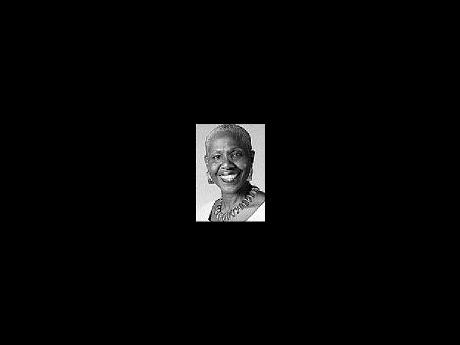 I had a revealing conversation with a middle-aged man in front of the Emancipation Park monument soon after it was unveiled. When I told him that I objected to the nakedness of the figures, he perplexedly asked, "Den a no so wi did stay inna slavery?" I managed to convince him that enslaved African-Jamaicans didn't 'walk street' in their birthday suit. They actually wore clothes. And they often dressed 'in style and fashion' during periods of leisure.

The Australian historian Barry Higman, who lectured for more than two decades at the University of the West Indies, Mona, recounts an entertaining story about enslaved black women's love of high fashion in his book Montpelier, Jamaica: A Plantation Community in Slavery and Freedom, 1739-1912.

Higman gives an extract from the 1832 Parliamentary Papers of the House of Lords in which an absentee plantation owner, John Baillie, reports how he was dissed by the women on his estate:

"On going out to Jamaica the last time [in 1825], I took out printed cotton as presents for my women and children. I arrived shortly before Christmas, and I em-ployed the house women and some of the field Negroes, women, to make it up into gowns for them. On Christmas Day it is usual for the Negroes to come up and ask their master how he does, and wish him a merry Christmas; they come up dressed. On this occasion they did not, except some of the very old women. I asked one of these women how it was; she said, 'You will see by and by'; I could not elicit any other answer. A second woman came up: she told me the Negroes had turned fool; I asked her what she meant, and she said, 'Massa, it is not the fashion to wear printed cotton; the fashion is white.' I asked who led the fashion; they told me the noble Lord's Negroes upon the adjoining estate, Lord Seaford's Negroes, had. That evening they came up and danced in their white dresses; ... the next day they did appear, however, in their printed gowns."

The moral of this story is that supposedly enslaved women claimed the freedom to dress as they pleased - even if it offended their self-proclaimed master. Notice the 'jinnalship' of the second old woman who knows how to play fool to catch wise. She says the women are foolish for wanting to dress in style. But it is Massa who ends up looking outdated when his printed cotton just doesn't cut any dash.

Barry Higman confirms that "[t]his example was not a unique case. Slaves on other Jamaican plantations, from the 1790s at least, were expressing preferences for particular textures and colours of cloth." In fact, clothing was an important medium through which African-Jamaicans expressed artistic values.

The Jamaican historian Steeve Buckridge has written a fascinating book, The Language of Dress, which reinforces this point. In his foreword, Rex Nettleford ack-nowledges the "heated debate" about the Emancipation Park monument. He highlights "the importance of dress ... in affirming self, delineating identity, defying denigration, and asserting self-dignity and pride". Oddly enough, Professor Nettleford was a member of the committee that selected the unclothed figures to 'grace' Emancipation Park.

I had another conversation in the park, this time with a Bobo Dread who observed with typical Rastafari wit that "yu can't park emancipation". He's right. Two static figures, trapped in a basin of water, can't really tell the grand story of the struggle to escape enslavement. But if you decide to 'park emancipation' and erect a monument, you should, at least, choose an image that gives an accurate reflection of our history. As Steel Pulse puts it, "Remember when we used to dress like kings."

Quite frankly, I think our historians must take much of the blame for the distorted stories that circulate about our past. It is not enough for them to write scholarly articles that are published in specialist journals. Written in the jargon of the trade, most academic publications are read only by members of the in-group. Some of them are not read at all; they sit on bookshelves gathering dust.

The knowledge produced in universities must be widely communicated through the popular media. Otherwise, the man and woman in the street (or in the park) can end up thinking that nakedness is a sign of both slavery and emancipation. Even the supposedly educated artist can make this mistake.

On that score, I must congratulate my colleague, Professor Verene Shepherd, for launching her new radio programme, 'Talking History,' which is broadcast on Saturday mornings at 9:00 on Nationwide Radio. It will go a long way to help set the record straight.

All the same, even when you try your best to popularise scholarship some people just don't get it. In response to last week's column, 'That Paul Bogle statue', Garnett Roper wrote an 'ignorant' letter ''Tuku tuku' dispute over statue', and an anonymous 'Struggling Artist' wrote a cowardly letter on 'The art of Carolyn Cooper.' Both writers insinuated that I was advocating the destruction of the monument in Emancipation Park - the very opposite of what I said.

One of the hard lessons I've had to learn as a teacher of English language and literature is that a lot of people simply don't understand what they read. But I did take heart when I discovered from the 'struggling artist's' letter that students taking part in the Schools' Challenge Quiz think my academic work is earth-shattering. I clearly don't have the power to move puny monuments. But, hopefully, my teaching will help open closed minds.