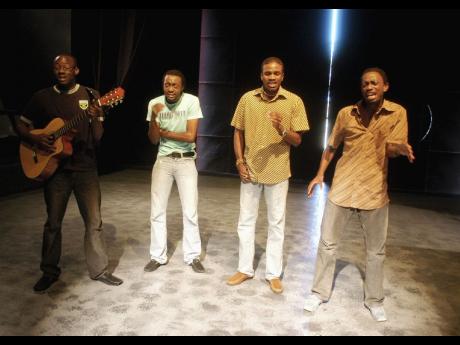 When doing a live album all aspects of the production process have to be well planned in order to ensure some level of success. This can be a difficult task for any musician to achieve.

Dub-poetry group No-Maddz recently attempted this mammoth task when they recorded their debut live album, The Trod, at Finnegans Winery in St Andrew. They were introduced to the challenges early as their recording got off to a late start because of technical difficulties.

"Why we waited so long is due to that issue. We even had a little power issue. We even had to turn off all the lights on the outskirts, so that we would have enough power for the show," No-Maddz member Sheldon Sheppard told The Sunday Gleaner.

"The mixing won't take so long 'cause everything was nicely balanced out. The camera people tell me that the shots are beautiful. The time that we waited was well spent."

Sheppard said a lot of effort was also put into the 'garrison' theme, which comprised motorbikes, bicycles, couches, a clothes line and aspects of a garrison yard setting.

"People were amazed at the production," he said, noting that the group will also be doing the acoustic version of the album in another two months at Red Bones Blues Cafe.

No-Maddz's latest production was something more popular with the pioneering reggae artistes. In 1975, Bob Marley and The Wailers recorded Live!. It was recorded over two days in July of that year at the Lyceum Theatre in London. The performance remains one of their most famous.

Sheppard said these albums have helped to inspire the group to do its live album.

"We got inspiration from that old-school format of reggae music. I think a live album is a great idea and everyone should attempt it. As an artiste, if you can't perform live, you can't perform," he said.

"I think this (The Trod) is the difference for us to start selling back records. I think it is the best way of expressing yourself 'cause there is no take two."

One band that knows the importance of getting it right the first time is Fab 5. When the band started, there was no mixing board or drum machine to help them achieve their sound.

"In the olden days, you had to do live recordings 'cause that's the only way you could do it. You didn't have any choice back in the days, because of the equipment," said Fab 5's Frankie Campbell.

Nowadays, one producer can make the rhythm for the track and the song is recorded on it later, he observed.

In addition, "only a few studios are big enough to hold a live band. People still do it, but the norm is just to record each thing", he said, noting that studio and live albums have their individual merits.

A lot of work

Between 1999 and 2008, Fab 5 recorded four albums in its Fab 5 Live Party Mix series. Doing these albums, Campbell said, was a lot of work. He explained that the group rehearsed until the material was ready to go in front of an audience. After the performance, post production was done on it.

Another artiste to have recorded a live album recently is poet Yasus Afari with Kiss Mi Neck. It was recorded at Tuff Gong studio with a live audience last year.

In making the album, the poet said the ambience had to be right and the texture, tone and feel have to be live. After recording, he said the material has to be balanced and dub overs must be done.

Yasus Afari noted there has been a re-emergence of live albums in recent times as persons are returning to live sets instead of computer-generated productions.

"No disrespect to dancehall, but the music nuh have the substance, variety, intrigue and interest like a live band. Live albums are always stayers," he told The Sunday Gleaner.

However, Sheppard said many artistes are afraid to do live albums based on the level of work required to do one.

"It's a challenging task. It is challenging but really fun. But with our theatre background, it shave off some of the work," he said, mentioning the other group members Chris Gordon, Oneil Peart and Everaldo Creary.