Man of many basses - Mikey Fletcher moves from classical to rockers 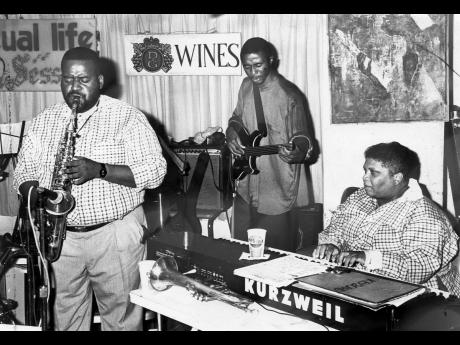 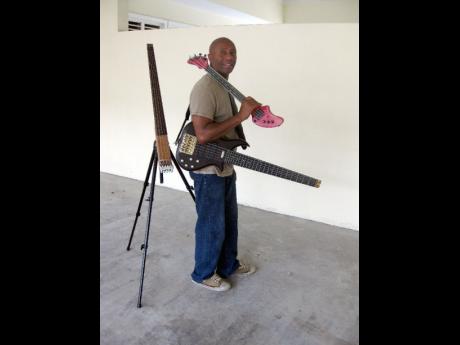 Mikey Fletcher with three of his guitars. - Mel Cooke photo
1
2

Michael Fletcher cuts a dramatic figure on stage as part of the Tantrum (formerly Hot Shots) band, black glove on hand, trenchcoat billowing, holding down the bass groove as Shaggy proffers the screaming ladies his 'Mr Lova-Lova' self.

Fletcher has been the constant in various incarnations of the band for 14 years, evolving into musical director. It's hardly likely that someone who knew him at nine years old, when he started taking guitar lessons, would recognise him now - not because he's all grown up, but the musical direction he has taken is vastly different from that which his guitar genesis would have indicated.

Mikey Fletcher, as he is better known, stepped from the road less travelled of the classical guitarist onto the bustling thoroughfare of rockers. That musical move was part of a larger one, migration from England to Jamaica when he was 11 years old, although the rockers did not come until he was at the Edna Manley College of the Visual and Performing Arts and versed in the classical guitar. While attending Ocho Rios Primary, he had continued music lessons with Lennie Hibbert.

"One day my teacher asked me out of the blue, 'Now that you are very good with your classical guitar, how are you going to earn in Jamaica?' That's when the reality hit me," he said.

It hit painlessly, though, as at the time Fletcher had been 'fooling around' with the bass guitar and taking trips to the performance room where popular music flowed. Although he said "they knew me as the Englishman, the classical guitarist", it was an easy transition. He went up to grade eight in both theory and classical guitar at Edna Manley.

It turned out to be a transition out of the college was well, Pam Hall introducing Fletcher to the north coast when a bass player was needed at a particular hotel in 1985. Even then, that did not satisfy Fletcher for long as he found that "I was learning so fast", knowing the jazz standards and the popular cabaret fare.

"That started to get stagnant," he said. So Fletcher came to Kingston, and told saxophonist Dean Fraser "I want to play with a reggae band that's going somewhere". It did not hurt that Fraser was part of just such an outfit and, after Fletcher returned to Jamaica from a three-week New York trip, Fraser told him the 809 Band needed a bass player.

So in 1987, Fletcher joined 809 and loved it. "Plying in 809 you got a chance to play with all the singers. Beres Hammond, Marcia Griffiths, I Threes, Freddie McGregor, Half Pint, Maxi Priest," he said. Then there were the deejays, like Shabba Ranks. The trips were "some memorable tours", where there was good, solid backing, chords and development in the music. "We did Sumfest, Superfest tours with Copeland Forbes in Europe, Half Pint, Beres Hammond, Dennis Brown and Freddie McGregor," he recalled. "We backed a lot of artistes, more singers than deejays. I love playing for singers. It gives me a chance to expand and explore."

He said the band had a full sound, with two guitar players and a horn section of Fraser, Nambo Robinson and Chico. But with the music changing, it got to the stage where some persons were asking for the rhythm section of 809 (Fletcher, Paul Kastick, Christopher Birch), but not the hornsmen. At Japansplash 1994, 809 played for Shaggy when he was breaking out with Oh Carolina. The following year he brought his own band, then a different set of musicians in 1996. He loved 809's sound, but was dissatisfied with his band. Fletcher, Kastick and Birch formed the new Shaggy band that did the Boombastic tour of 1996. Kastick left in 1999 and Birch in about 2003, as he started to do more production work.

Playing with Shaggy, Fletcher started to expand his stock of guitars. He remembers one show with the Backsteet Boys where Shaggy performed for 20 minutes, but he used five guitars. "You have a lot of bass players in Jamaica, playing regular bass. But I wanted to be different," he said.

That difference includes an upright bass (electronic) and Fletcher sets it up and starts playing as he speaks with The Sunday Gleaner, his deep appreciation of the instrument immediately evident. "I like playing this. It's a different side of you," he said. It is especially appropriate for when Shaggy does Oh Carolina.

"I am always thinking about the bigger picture," he said.

And as the upright bass in its acoustic form is steeped in history, Fletcher also acknowledges the bass players who came before him. He saw The Skatalites' Lloyd Brevett playing the upright bass and, speaking with him, understood the commitment to the instrument. "He got me into the upright," Fletcher said. "It is about knowing your history. I remember even before that you had rhumba box. You have Boris Gardiner, you have Leroy Sibbles," he said. Then there is Robbie Shakespeare, with whom he said he exchanges ideas, and Glen Browne with his clarity of tone.

Fletcher has a small bass guitar he calls 'The Bone', a fretless bass and a seven-string bass, among others. "I am prepared for any way the gig goes," he said. However, while he used to go on the road with several instruments, because of travel restrictions he has had to cut back.

These days, Mikey Fletcher travels less and says "I want to work more in Jamaica, from home. I want to get more into teaching, exchange ideas with other people". He has a reggae workshop proposal on the table and wishes to do them in Australia, Europe and Japan. And then there is his production work with his Megahbass Productions.

He has played bass on numerous songs and said, "95 per cent of the time I get to compose the bassline. That's the good thing about the studio stuff, you can create". As a producer himself, it is different from playing the bassline only.

Among the productions he has done are Gone With Angels (Shaggy) and Picking Up the Pieces (Beres Hammond). He plays them for The Sunday Gleaner and explains that this is the sound he favours.

"You have a lot of dancehall producers, which is good. But this is the direction I want to go. This is my dream. This is my way of doing it," he said.

Fletcher played his 'Granite' rhythm for The Sunday Gleaner, with cuts from Hawkeye, Ce'Cile and Chantelle Hernandez, among others.

Then there is the changing role of Tantrum Band, which he is a part of. "We are spreading our wings and doing selective shows," Fletcher said. They have backed Macy Gray and did the St Lucia Jazz Festival with Heather Headley, as well as Joe on a Shaggy and Friends concert.

"We are still Shaggy's band, but apart from that we are looking at artistes going somewhere," Fletcher said. And that does not include playing for "30, 40 artistes, drop the microphone and run off. Thankfully, Shaggy is not like that," he said.

Still, Fletcher said he does not see himself on the road continuously and wants to get to the point of setting up a small music school to pass on the knowledge he has acquired.

He has not forgotten the road he was on originally, saying "occasionally I play classical guitar to myself". And there may just be a candidate for the school already as, at two years old, his son is already strumming away at the air.