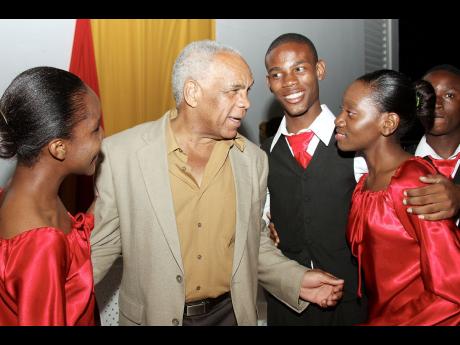 Glenmuir old boy and Opposition Spokesman on Finance Omar Davies is engaged in conversation with members of the Glenmuir High School choir. - Photos by Nathaniel Stewart 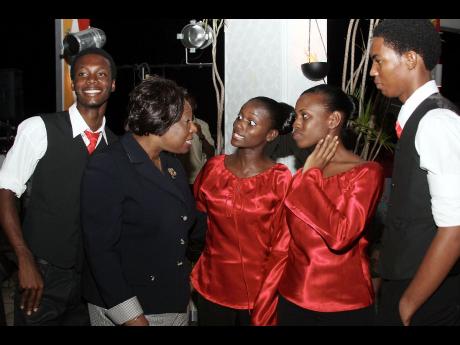 Minister of Youth, Culture and Sports Olivia Grange talks with members of the Glenmuir High School choir at the choir's album launch last Wednesday at The Jamaica Pegasus hotel.
1
2

Glenmuir High School choir's 19-track CD, Spirit on Fire: The Burning Truth, was launched last Wednesday evening at the 'Top of the World'. That venue, on the 18th floor of The Jamaica Pegasus hotel, was, according to the choir's artistic director, Sydney Bartley (also the director of culture in the ministry of youth, sport and culture), an appropriate place for the launch of a splendid CD by one of Jamaica's top choirs.

Addressing numerous dignitaries from the Church and various missions in Jamaica, as well as staff, students and friends of the Clarendon school, the keynote speaker, Minister of Youth, Sport and Culture Olivia Grange, congratulated the choir on the launch.

She noted that it indicated not only another strictly artistic endeavour, but a "willingness to get into the business of music". Her ministry, she added, stood ready "to assist the school in marketing the album".

Mentioning the various singing styles employed by the choir on the CD, the minister also spoke of the many uses of music - to soothe pain, as a balm to injury, as a call to rebellion, as a symbol of hope and endurance, and as a signal for unity, among others.

She urged the audience to see music not only as a cultural product but as "an agency of wealth creation". Teachers, preachers, social workers as well as accountants, she said, should make use of music in their various professions.

No one should leave the function, the minister said as she concluded her talk, without purchasing at least one copy of the CD. However, she and many other VIPs were presented with complimentary copies by Glenmuir's head boy and head girl and members of the choir.

The talks were interspersed with songs by the choir, many taken from the CD. One not on the album was Save a Life, a Shaggy and Friends song composed to raise funds for the Bustamante Hospital for Children. All the songs were, as various speakers observed, full of passion. The enthusiastic applause the choir received was well deserved.

Speaking to The Sunday Gleaner about the genesis of the CD, Glenmuir's director of the performing arts department, Dorine O'Connor, said that in 2007 the school's two main choirs combined. (At one stage, there were as many as five singing groups.)

The two choirs, the Glenmuir High School Festival Choir, which concentrated on pop and folk music, and the Glenmuir Concert Choir, which had a mainly classical repertoire, resulted in "such a really rich blend" that the choir directors felt that the sound should be captured on a CD.

With the help of the "brilliant arranger" and musical director Joel Edwards, a past student who has been with the choir from second form 11 years ago, songs were selected for the CD. O'Connor said that each year, as songs were chosen, the choir sang them in Jamaica Cultural Development Commission's song competitions.

The choir invariably won medals and trophies in that competition - as well as in other national and international ones. At last Wednesday's launch, several tables were laden with the medals and trophies in question. One winner was Marley's Redemption Song, which received the Best Arrangement trophy in the Bob Marley Song Competition orga-nised by the Marley Foundation.

O'Connor pointed out that the CD included two original songs. One is Spirit Filled, written and arranged by director Edwards. The other is Semper Flagrans (Flagrans Forever, from the school motto 'flagrans veritatis studio', meaning 'burning with the zeal for truth'). The latter was written by two past students, Ewan Simpson and Djenne Greaves, to celebrate the school's 50th anniversary last year.

Over the Easter weekend, the choir will be performing at concerts in May Pen and Mandeville.