The Budget and Easter 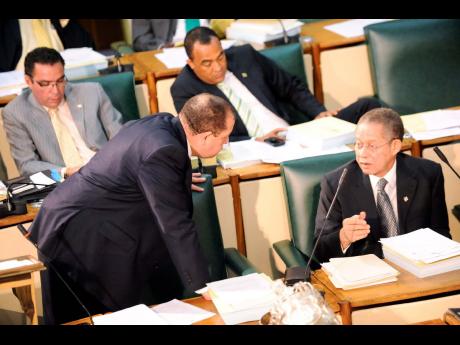 Finance Minister Audley Shaw (left) speaks with Prime Minister Bruce Golding during the tabling of the Estimates of Expenditure in Parliament on March 25. In the background are Daryl Vaz, minister with responsibility for information, and Agriculture Minister Dr Christopher Tufton. - Ricardo Makyn/Staff Photographer

In big political-economy terms, what does the Government hope to achieve from this year's Budget? The Standing Finance Committee of Parliament, which is the whole House, has laboured in futility over the Estimates of Expenditure in the days running up to Easter.

I say in futility because parliamentary debate in our backhanded Budget process does not make any real difference in determining the expenditure and income of Government, a matter reserved in the present order of things for the executive and, more specifically, for the minister of finance, and for the prime minister, if he or she happens to be a strong and determined budgeter.

Tired parliamentarians, like us, now have a legally-enforced period of rest, the holiest period of the year for most Christians, which can be used for reflection, if not for worship. But, then, there is the option of carnival for further exertions. Others, determined to do what Jesus said was impossible, serving both God and Mammon, will juggle church and bacchanal over a busy weekend.

We should be able to look to the Throne Speech for what the Government hopes to achieve in this fiscal and legislative year. But there has been so much disjunction between throne speeches, dutifully delivered by Her Majesty's representative as Head of State at the opening of each parliamentary year, and the reality on the ground as the year progresses that it is hard to believe the prognostications.

Last year the Budget was revised four times, the last just two weeks before the end of the fiscal year when an additional $31.5 billion was added. This does not inspire confidence in the Budget process, or in governance for that matter. But this has been the story of our lives and will be repeated this year. Even before the Estimates had been fully debated another $4.5 billion was tacked on.

Deep cynicism faces the process of governance. So much so that the positively radical differences between this year's Estimate of Expenditure and others over a whole generation past have gone largely unremarked.

Perhaps for the first time in the history of independent Jamaica we have been presented with a Budget which is less than the previous year's, nearly $100 billion or some 16 per cent less. For the first time in 13 years debt-servicing costs, at 48.5 per cent, have fallen below 50 per cent of the Budget. This is largely due to the success of the Jamaica Debt Exchange Programme which has pegged down the interest rate on the domestic debt. The adjustments required of holders of government paper, who are pretty much everybody, directly or indirectly, has not been painless and the Programme is not without its kinks.

But many of us ordinary citizens and not by any means financial analysts, believe the JDX is a critical rescue plan for the future of our country and a master political and economic stroke. A senior member of the Government has told me in personal communication that the administration is seriously concerned about not hurting the confidence and support it has been given in the JDX. If so be the case, one would have expected to see in the Budget and Throne Speech, an explicit conversion of debt relief into a national transformation programme.

For the first time in years, a Budget has been cast under IMF conditionalities. Elements of the media have chosen to report this as being in "the shadow of the IMF" and that the Budget was "cast in Washington and delivered in Kingston". Whatever might be its faults and failures, the dragon IMF brings two important advantages to the Budget - low interest rates, the lowest available, short of zero-rated grants; and, second, fiscal discipline. If external fiscal supervision is necessary to get our reckless Government, in the broad sense, to behave, so be it. The lazy Parliament was even "forced" to rush through financial legislation to meet "demands from the IMF".

The 'groundbreaking' Financial Investigations Division (FID) bill provides for the establishment of a department of government to be headed by a chief technical director who will advise the finance minister on policy relating to the detecting, prevention and control of financial crimes.

Leader of Government Business in the Senate, Senator Dorothy Lightbourne, told the Upper House, " I have been advised by the Ministry of Finance that this bill has to be completed on or before the 31st of March. It is so necessary for Jamaica to meet its obligation under the requirements of the Caribbean Financial Action Task Force, of which Jamaica is a member state and also consequent IMF conditionalities." Dilly-dallying by the Parliament had made the bill fall off the Order Paper.

In the just concluded 2009/2010 legislative year, Parliament managed to pass only 21 bills. Among those falling off the Order paper were the everlasting Charter of Rights Bill, the six anti-crime bills first tabled in December 2008, and the Corruption Prevention (Special Prosecutor) Act. Can we get the IMF interested in having these bills passed — or perhaps the US State Department?

Another landmark positive in this year's Budget, which should not go unremarked, is the presentation, for the first time, of the accounts of 'public bodies' outside the mainstream civil service. These bodies, collectively, will be spending $360 billion off the regular Budget. Most of these 68 entities raise their own monies from sale of goods and services, which is nonetheless public money which should be publicly accounted for.

Why does the Government need to 'own' entities like Petrojam, the Port Authority, NHT or the NWC, for that matter? The UDC and the HEART Trust may be a bit more understandable in this alleged market economy, though government ownership is not, even here, an inflexible necessity.

With Government owning the NWC, it is amazing that at this time of the worse national water crisis in living memory, Mr Shaw's diet Budget has not explicitly given top priority to water - 'water is life'. The water crisis will not go away even with rain since population size and demand have now far outstripped capacity. The last reservoir for the Kingston Metropolitan Area was built in the 1940s and has since then lost significant capacity due to silting.

And the Government, in the long, credibility-compromising tradition of breach of faith and promise by governments, is reneging on its honourable commitment to the Road Maintenance Fund. It is still not certain if all of the 20 per cent due to the fund from the Special Consumption Tax on fuel collected last year has been paid over. The Minister of Finance, who promised a progressively increased percentage of the SCT for the RMF has, in fact, projected $300 million less to be handed over this year. And this while contracting a road-rehabilitation debt with the Chinese Government against the RMF. Where is the IMF?

So, what does the Government hope to achieve from this year's Budget by way of coherent policy and development objectives? The governor general, speaking on behalf of the Government in the platitudinous Throne Speech, said "the over-arching objective of the government is a return to growth - growth that is sufficient and sufficiently sustained ... " from which all kinds of wonderful results will flow - jobs, foreign-exchange earnings, pay down of the debt, development of human resources, better infrastructure, and, yes, better government.

The heavy cart is here firmly jammed in front of the 'mawga' horse. I am writing in the bloodstained shadow of a radio newscast that "murders continue unabated across the island". The Gleaner last Sunday reported more than 400,000 cases piled up in "crippled courts". What is the fundamental business of a government which, until a couple of weeks ago, was the owner of Air Jamaica and which still owns the Sugar Company of Jamaica?

The Government of Jamaica, like governments almost everywhere, thinks its primary duty is economic management. So the passage of FID bill is rushed, albeit under IMF manners, but the Charter of Rights bill has been stalled for 16 years. Growth will continue to elude us until the government of this sick country gives proper priority to its core business.

The undelegateable minimal core functions of government are: The security of the state and the rights and freedoms of its citizens, the dispensing of justice, and the erection and maintenance of public infrastructure that private enterprise can't, or won't. Government is responsible for creating and policing the legal code and for maintaining public order so that citizens can pursue their self-interests without hurting each other's private interests or the public interests. Critical elements of protecting the property rights of all citizens is maintaining a stable currency and controlling inflation. Growth is a by-product of private enterprise in a peaceful, equitable, secure and predictable market.

On every single one of these responsibilities, the Government of Jamaica, everlastingly chatting 'bout growth has, over the years, been a dismal failure. And this Easter Budget, does not, from what I can see, reflect any strong grasp of what a strapped government ought to be doing as top priorities. Let us pray for them.

Violence and corruption, the betrayal of sacred trust by those in authority and their accommodation of evils like garrisons, injustice and lawlessness, oppression and captivity, blatant breaches of human rights, are polluting and crippling Jamaica, land we love. Our country faces a moral crisis which is greater than any economic crisis. How to rise from the moral morass, which is stifling all our endeavours, is very worthy of reflections at Easter.