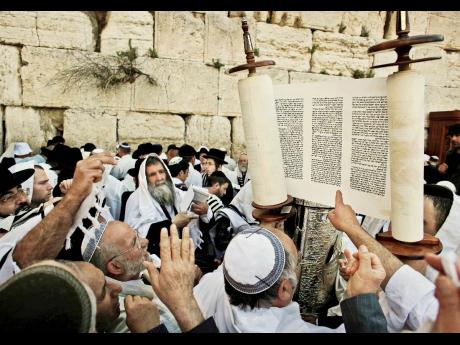 Ultra-orthodox Jewish men hold up a Torah Scroll before participating in a blessing during the Jewish holiday of Passover, in front of the Western Wall, Judaism's holiest site, in Jerusalem's Old City, Sunday, April 12, 2009. - AP

I have decided to take up the challenge of the indefatigable Anglican Internet minister, Dr Lucien Jones: "This Sunday ... we are celebrating Easter - the time of the glorious resurrection of our Lord Jesus. Now it is time to put away the celebration of the greatest and most competitive high school athletic competition in the entire world ... Champs. It's time to shift focus away from extradition matters. It's time to change gears and get away from IMF agreements, the new budget and other pressing national issues.

"Time to give CNN, HGTV and BBC a break and, yes, even Facebook and BB Messenger. Time to forget about the upcoming football World Cup, the cricket, the tennis. It's now time to journey with Christ, the saviour of the world ..." Well, Lucien dear friend, let's do that but I am not sure you will like some of the questions I will raise along the journey.

The very first question has to do with the appropriateness of the festival being used to celebrate the death and resurrection of Jesus. You might have read Peter Espeut's apologetic against "Judaisers" and for the Roman-baptised Easter celebrations (contra Passover), but facts are stubborn things. It is a fact that the earliest Christians memorialised the death of Christ at the same time the Jews celebrated their Passover.

The Palestinian historian Epiphanius (AD 315-403) wrote that the 15 Jewish Christian bishops who administered the Jerusalem church until 135 AD observed the Lord's death on Nisan 14, the date of the Passover. In the early Christian document the Apostolic Constitutions, the following rule is laid out: "You shall not change the calculation of the time, but you shall celebrate it with the same time as your Jewish brethren who came out of the circumcision (the Jews).With them observe the Passover."

Antipathy toward the Jews, and hence things Jewish, eventually led the church to reject the Nisan 14 (according to the Jewish calendar) observance of the Passover for the pagan fertility festival which became known as Easter. As I wrote in a column some years ago, "A brutal and vicious persecution against the Jews had started from early under Emperor Hadrian, who outlawed Jewish practices and customs. Jews and Jewish Christians were expelled from Jerusalem after Hadrian had crushed the Barkokeba Revolt of the Jews (AD 132-135). With that eviction of the Jews and Jewish Christians came increasing non-Jewish influence on Christianity and a rabid anti-Semitism. The rejection of the Passover and the substitution of Easter is a manifestation of this malice against the Jews as well as poor hermeneutics of Scripture."

There was a major early controversy in the fourth century, known as the Quartodeciman Controversy, between Christians of the West and the East. Christians of the East insisted on commemorating Jesus' death at the time of the Passover on Nisan 14 while those following Rome celebrated Easter.

The Council of Nicea, presided over by Emperor Constantine, had this chilling admission of the motivation for the rejection of the Passover date for the celebration of Jesus sacrifice on the Cross: "It appeared an unworthy thing that in celebration of this most holy feast we should follow the practice of the Jews who have impiously defiled their hands with enormous sin and therefore deservedly afflicted with blindness of soul. Let us then have noting to do with this detestable Jewish crowd: Strive and pray continually that the purity of your soul may not in anything be sullied by fellowship with the custom of these most wicked of men (We must) avoid all participation the perjured conduct of the Jews."

So complete was to be the break with anything Jewish that the Council decreed that that if Nisan 14 fell on a Sunday, then Easter should be celebrated the following Sunday. The origins of Easter can be traced to paganism, though Espeut would contend that roots and fruits are not the same thing. What of the Easter symbols though? Hear Seventh-day Adventist scholar Samuelle Bacchiocchi in his book God's Festivals in Scripture and History: Pagan influence can be seen in the replacement of the Passover symbolism of the lamb with that of the Easter hare. The Easter hare was once a bird that changed into a four-footed creature. The hare or rabbit became a symbol of fertility, the hare that aid eggs became the symbol of abundant new life of spring.

"The origin of the Easter egg is traced back to the ancient civilisations of Egypt, Babylon, Phoenicia and Greece where the universe is said to have been born from a mighty world egg." That's where the Easter egg and bun traditions come from.

In their work Passover: Before Messiah and After, Donna and Mal  Broadhurst trace the origin of Easter to Ishtar, the Sumerian goddess of love and war who, in Canaan, evolved into the moon goddess and wife Baal. According to the Sumerian legend, Ishtar was the wife of the Sumerian god, Tammuz. But quite apart from these historical associations with Easter, there are more fundamental and disturbing questions about the Easter story.

If Jesus came to die for the sins of the whole world, why have there been so many people who have never heard about Him and His plan? In other words, if God devised a plan to redeem mankind from sin, why does He seem to be so inefficient in getting that message to everyone? This has been a major objection lodged by atheists and agnostics against Evangelical Christianity. It is called The Problem of Non-Belief.

The highly competent and sophisticated atheistic philosopher Theodore Drange advances this as the more powerful of his two arguments for atheism in his book Non-Belief and Evil: Two Arguments for the Non-Existence of God. According to Drange, the Gospel message has the following three propositions: "There exists a being who rules the entire universe; that being has a Son and the ruler of the universe sent his Son to be the saviour of the world". If that is so, says Drange, then God must have an interest in everyone's knowing about this plan of salvation. Yet millions are dying without even knowing about Christianity or the Bible. How come?

Conservative Christians estimate that about two billion people on the earth today, Lucien, have never heard about Jesus. It is because of a geographical accident - if we don't accept Molinism - why we in the West have heard about Jesus and the Christian plan of salvation. If we just happened to have even born in some parts of Asia or in the Middle East we would never hear - and would die without hearing. So is Jesus really the saviour of the world, some would ask?

The Bible proclaims Jesus as the only way to God. He is said to be the way, the truth and the life. No one can come to the Father (God) except through Jesus. There is no other name under Heaven whereby men can be saved, Scripture says. If that is so what will happen to the over one billion sincere, dedicated and zealous Muslims, the hundreds of millions of devout Hindus and Buddhists as well as Taoists, Baha'is and members of various tribal religions?

What about those who, through no fault of their own, have never heard about Jesus and the way to salvation, according to the Christian Gospel? Are they doomed to hell forever? And if, in the view of some compassionate Christians, those persons can be saved without actually hearing about Jesus and accepting Him personally, is that not contradictory of Roman 10 which says, "If you confess with your lips that Jesus is Lord and believe in your heart that God raised him from the dead you will be saved."?

This seems to suggest that one has to know about Jesus to confess Him. Verse 14 anticipates us: "But how are men to call upon Him in whom they have not believed? And how are they to believe in him of whom they have never heard? And how are they to hear without a preacher?" It would not be fair for God to lock people out of His Kingdom and eternal life just because of the inefficiency of Christians in getting out the Gospel.

Christ's sacrifice at Calvary was stupendous, according to Christian theology, but if that message is not efficiently carried to all mankind, that sacrifice is diminished. Jesus Himself made a very important statement as recorded in John 9: 41: "If you were blind you would have no guilt but now that you say "we see" your guilt remains." This means that the billions who do not know about Jesus, and the millions who died before, without hearing about the God of the Bible, would not be guilty of sin.

But unless there is salvation beyond the grave, and that is anathema to orthodox Christian theology, that presents a conundrum for Christians. Robin Parry and Christopher Partridge raise some serious questions about Christian salvation and the efficacy of salvation in their book, Universal Salvation? The Current Debate.

There are also other questions which are raised about the appropriateness of a good and forgiving God requiring blood for His wrath to be appeased. Penal substitution has come under fire in certain theological circles and some elements of Pacifist theology have disturbing questions about God's decreeing violence with the death of His Son. This is said to pose moral problems.

Then there are the problems with the alleged discrepancies in the Gospel accounts of the crucifixion and the Passion Week as well as issues with the Last Supper/Passover celebration itself. Many disturbing questions at Easter. But I did take up your challenge, Lucien, to take leave of other matters to contemplate the death of Jesus - which might have raised more questions than answers.

Ian Boyne is a veteran journalist who may be reached at ianboyne1@yahoo.com. Feedback may also be sent to columns@gleanerjm.com