Off the streets - A prostitute turns her life around 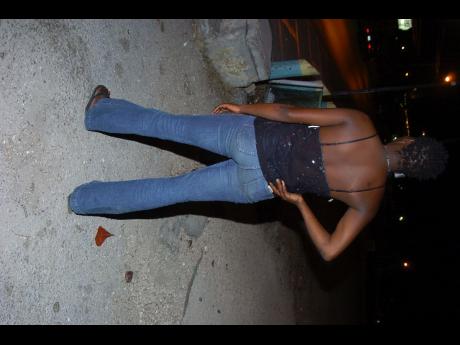 SHE SPOKE guardedly and quietly, careful to make sure no one overheard our conversation.

"I changed my mind a million times about discussing it as it's still embarrassing to talk about," says the 32-year old - who The Sunday Gleaner will call Andrea - who once made her living as a prostitute on the streets of Kingston.

"It's not like I'd planned to do it but is circumstances why it happen," she said, pausing as if to wonder whether she was giving out too much information.

She doesn't want many people to know of her former lifestyle, fearing it could spoil her chances of getting a job in these tough economic times.

With a loud sigh she mumbles incoherently before continuing her story.

Growing up in an inner-city community with only a mother caring for her and two other siblings, Andrea was no stranger to poverty.

She watched her mother, a domestic helper, struggle to send her children to school on a paltry salary for several years and was determined to make a better life for herself.

On leaving school, she was fortunate to get a clerical job while she attended evening classes.

She soon found herself pregnant, at which time the relationship with her boyfriend began breaking down.

Some months after her child was born, her boyfriend moved out, leaving her alone to support a young child while paying rent and utility bills on a meagre salary.

Andrea began looking for better-paying jobs but had no luck. To make matters worse, the place she worked closed its doors, putting her out of a job.

"Mi call several places, as well as send out applications but nobody took the time to write back. After a while, I got so frustrated; I didn't know where to turn," she said.

Desperate, she turned to the streets.

Andrea admits to being scared at first, fearing she'd be recognised by persons she knew from her former job as well as her community.

She recalls receiving support from other prostitutes who helped her adjust to life on the streets.

"Many of them had situations similar to mine as they had children and no jobs to support them. There were one or two with jobs paying next to nothing so they had to be hustling on the streets to try and make things meet."

She also discovered that life as a prostitute could be dangerous.

Although reluctant to provide specifics, Andrea said she met clients with whom she developed a rapport and who were sympathetic towards her. She also encountered "plenty weird people".

" I always make sure I collect money upfront before doing any further business, as some of them can be very tricky. Some will approach you with all kind of excuses as to why them can only pay a certain amount, and I have to remind them is all or nothing," said Andrea.

She said she felt uncomfortable with her double life, as she continually lied to family and friends who asked why she always seemed to be working night shifts.

According to Andrea, things started to change after she talked with someone who helped her turn her life around.

Andrea did not provide details of what was said, but it was enough to convince her that a life of selling her body on the streets was no longer for her.

She was able to resume evening classes and get a job, although she was recently laid off.

Right now, she is focused on putting the past behind and getting on with her life.

"Sometimes I regret doing it because it's embarrassing. I want to encourage young girls who want to go out there not to do it, although it may pay the bills.

"It's hard, but I just have to keep on trying. I don't want to go back down that road again, although there are times I feel tempted."