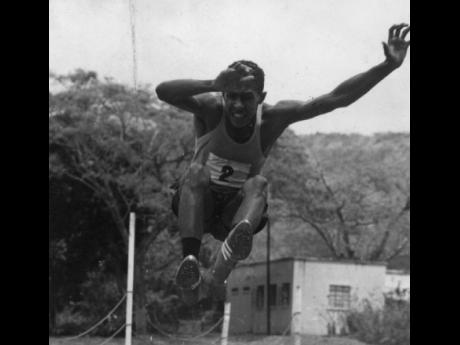 Anthony Matthews who was an outstanding performer on the Wolmer's team of 54 years ago when the school last won the championships prior to this year's victory. - File Photo

Wolmerians home and abroad are continuing to bask in the achievement of their track team which was crowned boys' athletics champions just over one week ago.

The victory is extra sweet for Anthony Matthews who was an outstanding performer on the Wolmer's team of 54 years ago when the school last topped Champs.

"It was with astounding pride and excitement that I absorbed the news that Wolmer's had won Boys' Champs 2010! It has been a long drought from 1956 until now. One cannot really imagine the feeling of elation until one becomes part of such an event," Matthews told The Sunday Gleaner from his home in Annandale, New Jersey, in the United States.

"We were not the favourites, we surprised everyone! Looking back, I realise that I even surprised myself," said Matthews who left Wolmer's in 1958 before injuries put paid to his days on the track.

"Back then, no one really had the chutzpah to face the Kingston College phenom Mabricio Ventura. I have always felt that on that day God was in my corner and Mr G.C. Foster was the angel that brought me success," added the former star athlete.

According to Matthews, the late G.C. Foster was like a father to the team, always encouraging and teaching the proper techniques.

Matthews said: "I recall vividly the day of the Class-Two long jump event at Jamaica College. The record for that event was long-standing, and nowhere in my mind did it occur to me to chase it.

"My first two jumps were no jumps, and it is impossible to describe the attack of nerves I experienced then and still remember to this day," said Matthews.

But the nerves would not prevent a performance that was not surpassed at Champs for more than 20 years.

Then it was on to Sabina Park where Matthews won the 100 and 200 metres to be crowned the 1956 Class-Two champion.

"Although I was just under 16 years old, I felt a great moment of pride as my then girlfriend, now my wife, (Helen) was there to see me achieve what was almost an impossible feat."

Matthews still has fond memories of G.C. Foster in whose memory the islands first sports college was named.

"By now you must detect my adoration, as it pertains to good old G.C. I have gone through life always remembering his favourite advice to us. He always told us it is good to win but best to perform with character, win or lose."

That advice still echoes around Wolmer's Boys' School today and the class of 2010 performed with character as they pulled off a victory that will be talked about for the next 54 years and beyond.