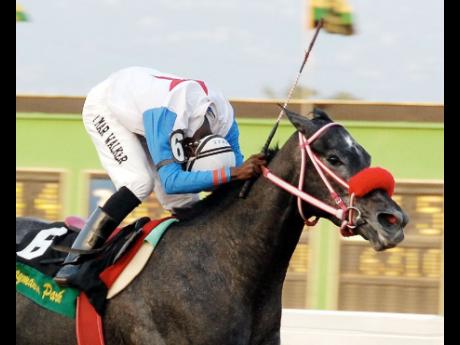 The unbeaten CASSANOVA BOY was tested for the first time at Caymanas Park yesterday, but showed good battling qualities to make it seven in a row in the Eros Trophy grade one feature over 1,400 metres.

MINISTEROFJUSTICE mounted a strong challenge on the outside approaching the distance and actually pointed for a stride or two a furlong out.

But CASSANOVA BOY would have none of it, as he responded to a bustling ride from Walker to win going away from early in the last furlong, clocking the fairly good time of 1:25.4 on a slow surface.

At the start, CASSANOVA BOY's lesser fancied stable companion SATAN'S RULE pitched on leaving the gates, decking jockey Delroy Beharie and proceeded to run loose in the field of six.

The winner's other stable companion NEW KINGSTON (5-2) led from top weight HE'S REALLY OK on the rails, followed by the loose horse and CASSANOVA BOY, who had to be ridden tentatively to avoid the loose horse running out a bit.

CASSANOVA BOY mounted his challenge approaching the 600-metre pole, went by NEW KINGSTON and the 2009 Derby winner HE'S REALLY OK approaching the home turn, then staved off the strong-running MINISTEROFJUSTICE at a crucial stage.

Owned by Elizabeth DaCosta, Winston Kong, Raymond Rousseau and the Trinidadian E. Dulal Whiteway, CASSANOVA BOY carried 59.5kg and was winning in grade one company for the first time.

"The race was marred by my other horse who threw his rider at the start," explained DaCosta.

"Walker had to ride a very watchful race from early and although the horse proved equal to the task under the big weight, you can never tell when one of the lightweights will pop up," he added.

Meanwhile, Walker (29 wins) rode two winners on the card in CASSANOVA BOY and 7-1 chance MISS PAM AND ME (made most) for trainer Fitzgerald Richards in the second race over the straight, widening his lead over closest rival Paul 'Country' Francis (20), who rode one winner, THE ONE (5-2) for trainer Enos Brown in the eighth.

Dwight Chen was the top trainer, thanks to two winners in 6-5 chance BOLDLY FORMAL (made all) in the first race and 2-5 favourite PRINCE THEO under Wesley 'Callaloo' Henry in the seventh.

Meanwhile, 25-year-old apprentice Chalrick Budhai marked his first success in the saddle when he guided 3-2 chance GENERAL CURLIN for trainer Eraldo Fullerton to an easy victory in the fourth race over 1,600 metres for maiden four-year-olds and up.In this race, the 4-5 favourite GREEN HORNET broke down leaving the 1,000-metre pole and did not finish. He broke a leg and had to be euthanised.