Why we hate mothers-in-law 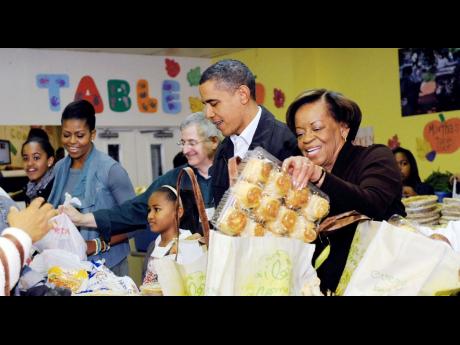 United States President Barack Obama has a great relationship with his mother-in-law, Marian Robinson (right), his daughters, Sasha (beside him) and Malia (left), and first lady, Michelle Obama, as they pack food for Thanksgiving at Martha's Table, a food pantry in Washington, last Thanksgiving.

They say when you get married, not only do you marry the person of your dreams, but his relatives as well. And usually, it's the mother-in-law who insists on playing a prominent role in your marriage.

The truth is, after marriage, you cannot escape dealing with your mother-in-law. You have to be grateful if she is likeable and easy-going. But some people are not that lucky, as their mother-in-law might be the their worst nightmare!

Usually, the daughters-in-law feel their wrath much more than the sons-in-law. The mother/daughter-in-law relationship is usually quite complex. Sometimes, the two will be best friends, and in such cases, it's the wife who has gained a second mother. On the other hand, very often the relationship turns out to be disappointing. It can be one filled with tension, spite, jealousy and even hatred. If this sounds like your relationship with your mother-in-law, you are not alone. Many women don't get a long with their husband's mother at all. Having feelings like these is not only unhealthy, but could negatively impact the marriage. Flair asked some married individuals to share some of their reasons for disliking their mother-in-law and they are listed below.

Michael says some mothers-in-law have very domineering personalities. They inject themselves in private situations, and in many cases, they hold an abundance of influence over their daughter and that can create a problem within a marriage. It's no longer only a situation between spouses but there is a third party in the mix."

Karen says her mother-in-law usually wants to take control of her son's life and tell them what to do. To make matters worse, if there is an argument between them, the mother-in-law will naturally take sides with her son, even if he was the one who was wrong.

Kim says mothers-in-law are classic hypocrites because she has experienced where her mother-in-law pretends to be an angel in front of her; always being nice to me, but behind her back, she tears her down.

Danny says they are the way they are because men are more likely to turn to their mothers for advice than to their wives. This results in some wives being left to compete with their mother-in-law. This situation only encourages the mother's bad behaviour and leaves the wife competing for her husband's attention.

Sophia explains that another major reason for some wives dislike of their mother-in-law is that these women find it difficult to let go of their sons. They need to realise that their sons are no longer babies but married men!

Do you have serious issues with your in-laws? Share them with Flair readers at: lifestyle@gleanerjm.com

Some women find it difficult to let go of their sons. They need to realise that their sons are no longer babies but married men!