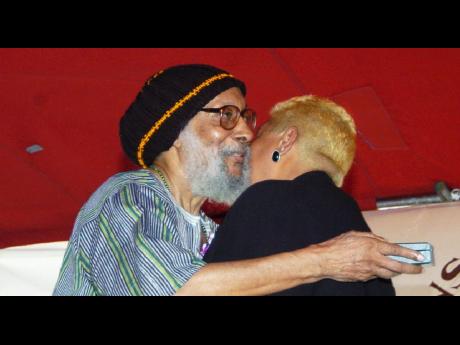 Kamau Brathwaite (left) hugs then Minister of Tourism Aloun Assamba while holding his Musgrave gold medal, the only one handed out in 2006, on East Street, Kingston, in March that year. - File

THE GOLD Musgrave Medal awarded to renowned Barbadian poet Kamau Brathwaite in 2006 has been stolen from his New York home in the United States, one of thousands of items of which he says he has been robbed.

"It is an award that I cherish and I was very hurt to find out that it was missing," Brathwaite said.

"It's a kind of Oscar (Academy Award). It has that kind of status, and to have that stolen is very hurtful," he continued.

Brathwaite's Musgrave gold was the only one awarded in 2006. Eight silver and bronze medals were handed out then.

The Musgrave award is one of the oldest of its kind in the Western Hemisphere. The medals were first awarded in 1897 as a tribute to former governor of Jamaica, Sir Anthony Musgrave.

Brathwaite said he intends to write to the Institute of Jamaica to find out if he can purchase a replacement.

He explained that the medal was on a shelf in the New York University campus home he shares with this wife.

"When we were taking down the (Christmas) cards in December, to my horror, the Musgrave Medal was not there," he said.

The former University of the West Indies professor revealed this was not the first time items from his "enormous archive of Caribbean materials" had been stolen from his home.