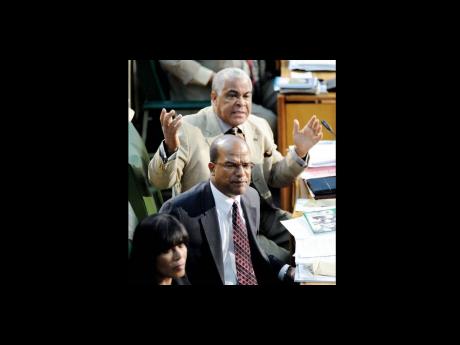 Opposition Members of Parliament Robert Pickersgill (back) and Peter Bunting react to House Speaker Delroy Chuck (not in picture) while Opposition Leader Portia Simpson Miller looks on during a recent debate in the House of Representatives. 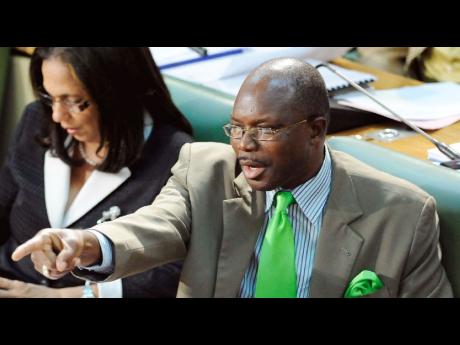 Government member Everald Warmington gesticulates towards the Opposition benches during a recent sitting of the House of Representatives. 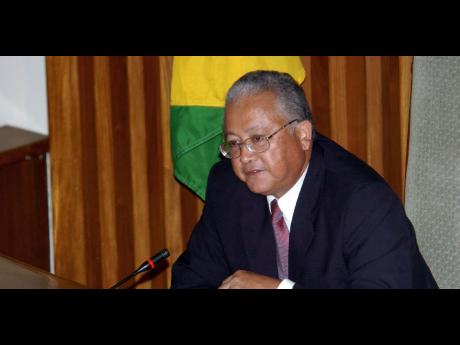 We are amazed by the apparent reason given by Delroy Chuck for members of parliament to observe the rules of the House of Representatives.

The argument proffered by the Speaker was that if parliamentarians behave badly it would be reported by the media because "the media don't like any politician".

"Every single thing that you say that is destructive, that really puts us in a bad light, the media is the first to highlight it ... When you are calm and OK, that is not news, but when you open your mouth, that is what they pick up and try to knock us down with, and we are our worst enemies at that," Chuck said last week during the sitting of Parliament's Standing Finance Committee.

We are disappointed, to say the least, about the unfortunate statement. The gravamen of our disappointment is in two key areas: First, Chuck's lack of understanding of the role of media in a democracy. Second, there appears to be cowardice on the part of Chuck to be guided by the Standing Orders and punish offending MPs.

The demonstration of crude and offensive behaviour in the House of Representatives has been one of great concern to many Jamaicans. This fact is not lost on Chuck who has, in the past, pleaded with the bully boys to conform to the rules. However, his pleas for order tend to come only after the media highlights instances of unfortunate outbursts by legislators while they do the people's business. It is an incontrovertible fact that filthy insults and disruptive behaviour has enjoyed free reign in the House under Chuck's watch. The offenders are usually the same persons and the response from the chair, on most occasions, is a slight reprimand.

We are of the view that Parliament is no Sunday school. We believe that the parliamentary experience is richer when clean and palatable barbs are sent across the floor. However, because so many MPs seem to struggle with the basic intellectual fortitude to jab an opponent without punching below the belt, many of the exchanges - which are often not reported by the media - are unparliamentary.

Contrary to Chuck's assertion, there are numerous instances of what might be considered unparliamentary behaviour that have not been reported by the media. The conduct of South West St Catherine MP Everald Warmington is a case in point. Last week, Noel Arscott, MP for South West Clarendon, sought to find out what was in place to ensure the proper disposal of solid waste on the island. Even before Arscott could complete his question, Warmington shouted across the floor, instructing him to shut his mouth because he, Arscott, is toxic waste. Chuck, to his credit, cautioned Warmington about his utterance on that occasion. To the best of our knowledge, this and several other instances did not make the news anywhere.

The issue of behaviour in Parliament goes far beyond the offender. It is our view, however, that Chuck, in his two and a half years into the job of Speaker, has not demonstrated consistency in his attempt to bring order to the House. He has ignored provisions in the Standing Orders to run disruptive members from the Chamber.

But, perhaps it is the case that Chuck wishes not to rock the political boat to the extent that it would earn him the wrath of his compatriots. It is clear that Chuck wants to see order in the House but wishes this to come, not from his leadership as Speaker, but rather from his telling them that the media is the wicked wolf waiting to devour their flesh. Unfortunate.