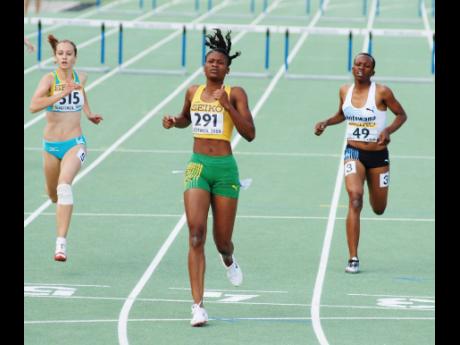 The Jamaican boys Under-17 shot putters dominated the morning session of the 39th Carifta Games, with Chadwick Dacosta producing a new championship record to win the event yesterday.

The crowd at the Truman Bodden Sports Complex here marvelled at Dacosta's brilliance as he consistently threw well throughout, setting a new mark of 16.99 metres with his third throw.

Dacosta's Jamaican counterpart Kashif Ford was in fine form too, taking the silver medal with a 16.32m throw, as Trinidad and Tobago's Hezekiel Romeo's 16.18m earned him bronze.

In the girls' pentathlon, Jamaica's Janieve Russell grabbed the most points in the long jump, recording 5.70m, ahead of Kiersten La Roche of Trinidad and Tobago (5.53m) and Martinique's Audilia Daveiga (5.23m).

Jamaica shone again in the boy's heptathlon high jump when Ramone Bailey won with a leap of 2.01m to beat Kemar Jones of Barbados (1.98m) and Julien Fletcher of Trinidad and Tobago, who was third with 1.89m.

Trinidadian Jehue Gordon delivered as pro-mised, smashing his own 400 metres hurdles record to convincingly win the event in the evening session.

The gifted 18-year-old put the race to bed as a contest after 200 metres before racing unchallenged to the finish to clock a new championship record of 49.76 seconds at the Truman Bodden Sports Complex.

In the process, Gordon reset the mark he established last year in St Lucia when he clocked 50.01.

"Going out (in the early part of the race), I realised I didn't have anyone to run with," Gordon said afterwards. "My technique wasn't that good but I stayed with it."

The heavy favourite after his 48.26 at the World Championships in Berlin last August, Gordon got away from the blocks quickly and was first to the opening hurdle.

From thereon, he powered down the backstretch defying a strong wind to be clearly ahead of his Under-20 field with 200 metres left.

Though tiring in the final 100 metres, he had enough left to reach the finish with a strong stride, with Jamaican Dwayne Extol finishing a distant second in 51.50 seconds and Bahamian Nejmi Brunside third in 52.23 seconds.

Bahamian Stephen Newbold joined Gordon in record-breaking vein as he captured the Under-17 version of the event in a time of 52.75 seconds, eclipsing his countryman Burnside's two-year-old record of 52.81.

Newbold was forced to produce a strong performance down the stretch as he held off defending champion Barbadian Tramaine Maloney in 53.87, with Maloney's teammate Dario Scantlebury claiming bronze in 56.26.

'I brought it home'

"It feels very good," an elated Newbold said. "I backed myself, maintained my form and brought it home."

There were no new marks in the girls' 400 metres hurdles as Ristananna Tracey led a Jamaica one-two, clocking 58.28 seconds to beat countryman Danielle Dowie (59.09), with Trinidad and Tobago's Gabriela Cumberbatch third in 59.84.

On the field, Jamaican Chanice Porter captured the girls' Under-17 long jump with a leap of 5.64 metres, while teammate Ashani Wright took the boys' Under-17 high jump with a measurement of 1.98 metres.

Grenadian sensation Kirani James and Barbadian Shakeim Greaves set up a mouth-watering clash in today's Under-20 200 metres final when they easily won their semi-final heats.