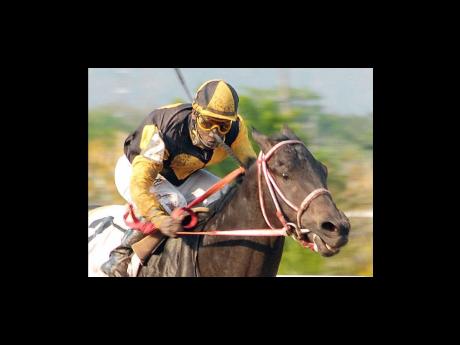 The island's top native-bred three-year-old colts and fillies will have their day in the sun at Caymanas Park today, when they contest the 1000 and 2000 Guineas over 1,600 metres.

Both races not only mark the 36th running, but offer whopping purses of $3.6 million. The 1000 Guineas, the ninth race in the 12-race holiday programme, is confined to the fillies and the 2000 Guineas, the penultimate race on the card, for colts and geldings.

While the 2000 Guineas is basically confined to three horses - LIFEISJUSFORLIVING, COLONEL WALES and CLASSY PROSPECT - the 1000 Guineas throws up at least six fillies with good claims.

They are GABIWITZO, AL FOUZIA, MOMENT OF HOPE, HERROYALHIGHNESS, REGAL SENSATION and the lightly-raced MISS LEE, who won easily on her recent debut.

All are expected to figure prominently, but as far as winning is concerned, DaCosta's best hope lies with the lightly raced, but highly thought of MOMENT OF TRUTH, who has been stepped up at exercise in her preparation for this race and should prove competitive with champion jockey Omar Walker aboard.

The same is true of two other lightly raced fillies, HERROYALHIGHNESS and MISS LEE, both of whom ran green last time out. The experienced AL FOUZIA, on the other hand, stamped herself as the best two-year-old filly last season and although disappointing as the favourite behind GABIWITZO in the recent Thornbird Stakes over 1,400 metres on March 13, finishing 5 1/2 lengths fifth under top weight, reports better prepared and can definitely rebound on 6kg better terms with GABIWITZO.

Still, preference is for GABIWITZO, who has been going from strength to strength in recent weeks.

Trained by Fitznahum Williams, who posted the filly ALSAFRA to win the Triple Crown in 2008, GABIWITZO has won her last two races over 1400 metres in contrasting fashion. The Pat N Jac-Royal Grind offspring got up in the nick of time to beat MERIT'S BRITE LITE by a short head on February 20, yet when they met again in the Thornbird Stakes three weeks later, she beat MERIT'S BRITE LITE by 4 3/4 lengths.

Williams explains: "Gabiwitzo has a big heart and I'm not worried that she only had 51kg when winning the Thornbird, as she won with 56kg before that.

"She's on top of herself now. I got two good works out of her coming into the race and now bidding for a hat-trick of wins in this important race, I have high hopes for her given the necessary racing luck."

GABIWITZO's time of 1:26.4 would suggest that she has come on at the right time and with her preparation on cue, her fine turn of foot should seal the issue in the last furlong, especially with US-based Jamaican jockey Andrew Ramgeet having flown in from Mountaineer Park for the ride.

In contrast, 11 colts and geldings will face the starter for the 2000 Guineas and from all indications, unbeaten LIFEISJUSFORLIVING will turn it into a procession.

Unraced as a two-year-old last season, the talented chestnut gelding from the stables of Wayne DaCosta has won his three races thus far by the combined margin of 26 lengths, the most recent on March 13 when strolling home by 9 3/4 lengths from JUNIOR MINISTER in the Prince Consort Stakes over 1,400 metres, covering the distance in the smart time of 1:25.2.

He continues to look the part at exercise and despite the claims of last season's champion 2-y-o COLONEL WALES, his speed should prove too much for rivals.

I also like DOUBLE THE HONEY in the first race; ESQUIRE in the third; MERIT'S BRITE LITE in the fourth; ALLORA in the seventh; and SKITTLE QUEEN in the Easter Sprint (eighth race).