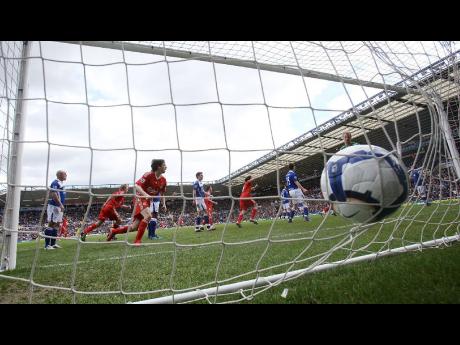 Ilan scored a late equaliser as relegation-threatened West Ham ended their six-game losing run with a 2-2 draw at Everton yesterday, while Liverpool were held 1-1 by Birmingham to lose ground in the race for fourth place and the final Champions League spot.

West Ham looked to be heading for another defeat when Ayegbeni Yakubu nodded Everton 2-1 ahead in the 85th minute, but Brazilian striker Ilan headed the leveler as West Ham moved a point clear of the relegation zone.

"All the team decided to fight until the end, and today was a clear demonstration that we kept our performance because we never gave up," said West Ham manager Gianfranco Zola. "After the 2-1 it could have been a massive blow, but I was very pleased with my team for what they did today.

"It is important after a long spell of defeats to have this point. I think it will give a lot of confidence to the players. I feel they found extra spirit today."

Everton went ahead in the 24th minute when Diniyar Bilyaletdinov guided a finish home with his head, after Tim Cahill had flicked the ball across the six-yard box.

West Ham should have equalised in the 37th, when Everton defender Sylvain Distin was adjudged to have pushed Carlton Cole over inside the box, but Mido's tamely hit penalty was pushed round the post by Tim Howard.

Seconds after West Ham midfielder Mark Noble had hit the bar with a lob, his team equalised from a corner, Manuel da Costa scrambling the ball in from close range in the 60th minute.

The draw puts West Ham on 28 points from 33 games. Hull have one point fewer in the 18th, but have a game in hand. If West Ham had won at Everton, last-place Portsmouth, which have only 14 points, would have been relegated, but they survive another week.

Steven Gerrard fired Liverpool ahead in the 47th minute when a shot from Glen Johnson came to the England midfielder on the left of the area, and he drove the ball into the far corner.

The lead lasted only nine minutes before Liam Ridgewell was left unmarked to collect a cross from James McFadden and score from close range.

"We didn't have any margin for error beforehand and now we have less margin in terms of coming fourth," said Liverpool manager Rafa Benitez, whose sixth-place team is in danger of finishing in its lowest position since 1999, when it ended seventh.

"But it depends on the other teams and how they do as well. We have to believe we can win all our remaining games and have confidence the other sides will lose. We just have to keep going because there are still a lot of points to play for."

Jason Scotland gave fifth-bottom Wigan a 34th-minute lead at Craven Cottage, but Stefano Okaka equalised in the 47th and Brede Hangeland headed home a corner in the 58th for the winner.

In Saturday's games, Chelsea replaced Manchester United at the top of the standings with a 2-1 victory over the defending champions at Old Trafford and third-place Arsenal stayed in contention by edging Wolves 1-0 at home, thanks to a goal in the fifth minute of injury time by Nicklas Bendtner.