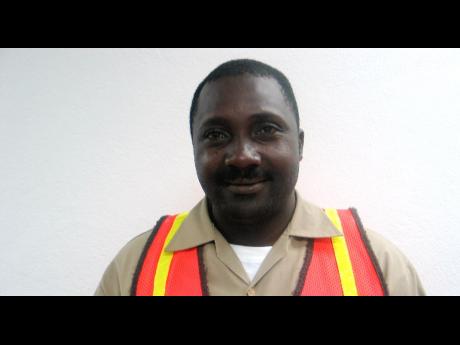 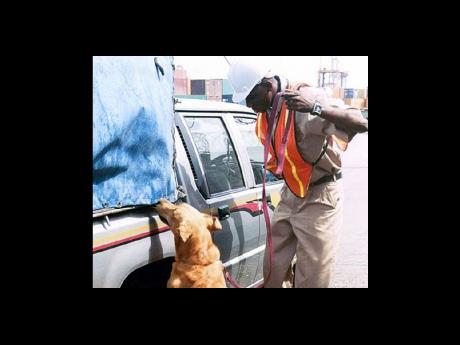 This canine sniffer inspects a vehicle for narcotics and drugs. He is guided by a Shipping Association of Jamaica (SAJ) trainer. SAJ's Canine Division has been breeding dogs for the past three years.
1
2

THE SHIPPING Association of Jamaica (SAJ), through its canine-breeding programme, has embarked on an initiative to provide the Jamaica Constabulary Force (JCF) with quality canines at highly competitive prices.

The canines, which are of the Labrador class, are bred and trained to work in the anti-narcotic and drug-detection service. Breeding of canines is done through the SAJ's Canine Division - the only legally sanctioned private sector-operated, canine-sniffer service in the island.

SAJ's canine division has been breeding dogs for the past three years. According to Garvin Duffus, supervisor/trainer at the Canine Division, the SAJ opted to start its own breeding programme after the sourcing of canines used in the anti-narcotic and drug-detection service became difficult and costly.

"To purchase and import a dog from the United Kingdom can cost up to £2,000," Duffus revealed.

"We have been able to successfully breed and train our canines. Out of a litter of nine, seven canines were successfully trained," he added. "The two that were unsuccessful in the training exercise were used in our breeding programme."

In the last year, the SAJ provided a total of six dogs to the JCF. "Those dogs have all been successful in the training," Duffus said.

He pointed out that breeding was normally done once a year to service the needs of the Canine Division, but the cycle will be increased to accommodate the needs of the JCF, which now requires 50 canine partners for its service.

The Canine Division currently has 14 canine partners working in the sniffer service. They are trained by SAJ's in-house trainers, which include Garvin Duffus and Colin Roper, who were both trained by the JCF's Canine Division.

The SAJ's Canine Division was established on August 1, 1994, against the background of the scourge of drug trafficking threatening the reputation of Jamaican exporters, as well as the integrity of cargo passing over local ports.

Inspections are done on the premises of exporters, as well as at the terminals.