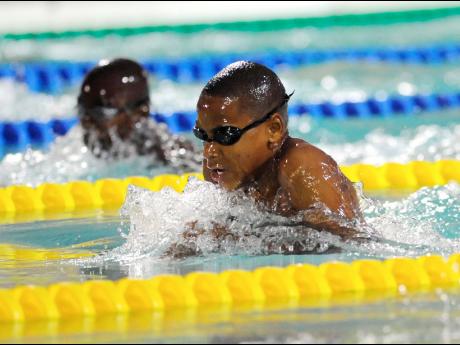 Jamaica's Kevaughn Campbell swims on his way to winning the gold medal in the boys' 11-12 50-metre breaststroke final during the 25th Carifta Swimming Championships at the National Stadium pool yesterday. - Ricardo Makyn/Staff Photographer.

CARIBBEAN superpower Jamaica ended the 25th Carifta Games in a blaze of glory last night, winning gold in three of the four 4x400 metres relays to close the three-day regional championships at the Truman Bodden Sports Complex in Grand Cayman with 72 medals to mirror another commanding display.

The impressive Under-17 Jamaican sprinter Skeen also completed the sprint double, putting the exclamation mark on a fine championships by posting a new record in the 200 metres.

He produced a dominant display of sprinting to dismiss his challengers with ease, clocking 20.84 seconds to eclipse fellow countryman Jazeel Murphy's 20.97 at last year's Games in St Lucia.

Bermudian Jeneko Place was second in 21.27 with Jamaican Odail Todd third in 21.55 seconds.

In the relays, the all-conquering Jamaicans, anchored by 200m gold medallist Shericka Jackson, powered to a sensational victory in the Under-17 event.

However, they had to dig deep to win the Under-20 girls' and boys' events, as Trinidad and Tobago (in both relays) and The Bahamas, in the closing race, ensured a scintillating finale.

Jamaica's only 4x400m blemish came in the Under-17 boys' race that was won by Trinidad and Tobago, where they failed to medal.

However, their dominance was almost a carbon copy of the feats recorded in the sprint relays the previous night.

Jamaica were breathtaking, winning both the Under-17 and Under-20 boys' events, while also taking the Under-17 girls' version.

There was never any doubt about the result in the Under-17 event, especially after 100 metres champion Odean Skeen's pacy second leg that set up an easy win in 41.62 seconds.

Jamaica kept up the pattern in the Under-20s, executing cleanly all the way through to ensure Brandon Tomlinson got the baton first on the anchor leg to speed to 40.10 seconds and reach the finish ahead of Trinidad and Tobago.

Jamaica's Under-17 girls had earlier set the tone when they clocked 45.98 seconds in dismissing threats from the second-place Barbados and The Bahamas, which finished third.

The race remained competitive until Shericka Jackson stormed down the stretch on the anchor leg to clinch a convincing victory.

Trinidad and Tobago picked up the corresponding Under-20 event, thanks to Jamaica's ill-fortune and a tremendous second leg from Michelle-Lee Ahye.

With T&T trailing after the first leg, the 100 metres champion ate up turf down the backstretch to haul the twin-island republic back into contention.

Jamaica, however, dropped the baton on the changeover and though Danielle Williams, in full flight, caught it as it bounced from the track, T&T and The Bahamas had sped ahead to complete their final handovers first.

The high-stepping T'Keyah Dumoy then took T&T to the finish in 45.06 seconds, ahead of the fast-closing Tynia Gaither for The Bahamas in 45.59 seconds, with Jamaica third.

Megan Simmonds led a Jamaican one-two with Shenel Fancis, as she clocked 13.64 seconds to win the Under-17 girls' event, while Samantha Elliott sped to a new championship record time of 13.42 in winning the corresponding Under-20 race, ahead of teammate Tonique Sobah.

In the Under-17 boys' hurdles, Davian Dennis just got the better of fellow Jamaican Omar Graham to win in 113.28 seconds.

Middle-distance queen Natoya Goule, who ended with three gold medals following a sensational third leg on the 1600m Under-20 team, also formalised herself as a double individual gold medallist.

Jamaica extended their dominance to the Under-17 girls' 200 metres when Shericka Jackson clocked 23.64 seconds to hold off her teammate Saqukine Cameron in capturing gold, while Allison Peter took the Under-20 girls' version.

Grenadian sensation Kirani James completed the double by winning the 200 metres, while Trinidadian Jehue Gordon set his second record in winning the 110 metres hurdles to also grab his second gold of the championships.

The outstanding 17-year-old James, who breezed to a new record in the 400 metres on Saturday night, repeated his brilliance by cruising to 20.76 seconds in the Under-20 boys' event. A fast-finishing Rachmil Van Lamoen of the Netherland Antilles clocked 20.90 to be second, while Shakeim Greaves was third in 21.29 seconds.

Gordon, meanwhile, who brushed aside his field on Sunday night in winning the 400 metres hurdles in record time, sealed his double gold by clocking a new championship record time of 13.41 seconds. It ensured he eclipsed the old mark of 12.42 set by Barbadian World champion Ryan Brathwaite three years ago.

Barbadian Greggmar Swift, who led for the first 50 metres, finished second in 13.75 seconds while Stefan Fennell of Jamaica claimed bronze in 13.76 seconds.

Shanice Hall added to Jamaica's medal pile when she won the girls' Under-20 high jump with a leap of 1.80 metres ahead of teammate Petagaye Reid with 1.76m.