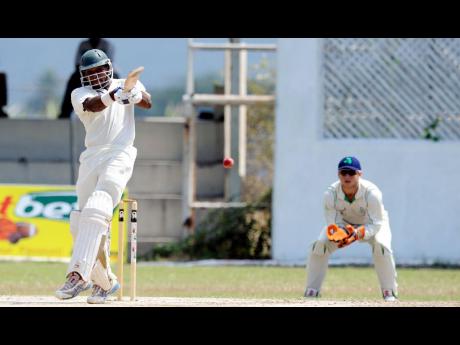 All-rounder Andre Russell tormented the boundary ropes with a blistering knock of 108 not out, as Jamaica and Ireland played out a draw in their three-day Supreme Ventures Sports Betting Jamaica Cricket Festival match at Chedwin Park yesterday.

Russell, who helped himself to 4-41 in Ireland's first innings yesterday, returned to score his century off a mere 65 balls. His knock, inclusive of 10 sixes and seven fours, pushed the Jamaicans to 314-7 when play was called off an hour before the close. At that stage, the homesters held a commanding a lead of 369 runs.

Opener Brenton Parchment was also in good form, scoring a patient 83, as he shared in a strong 100-run partnership with Danza Hyatt, who scored 53 off 94 balls. It was Hyatt's second half-century of the match after his first-innings knock of 55.

The Jamaicans found themselves in a spot of bother during the second session as they lost three wickets in quick succession - Donovan Pagon going for 16 with the score on 158. Horace Miller (0) and Parchment followed soon after with just one run added to the scoreboard.

Jamaica's captain, Tamar Lambert, was happy with his team's overall performance over the three days and reserved special praise for youngsters Russell and Dewar.

"It was a good three days of cricket. I thought we batted very well in the first innings," said Lambert.

"First and foremost, we had to ensure that we didn't lose the game. I think that the way we bowled on Sunday was excellent on a flat Chedwin Park wicket. The way Akeem Dewar and André Russell bowled, to restrict them to 275, was an excellent effort from them and from all our bowlers.

Russell in the meantime was elated with his maiden first-class century.

"It was a typical innings for me," Russell said. "I got a few bad balls and I managed to put them away. It's my first hundred at this level, so it means a lot to me, I'm very happy with my innings and my overall performance in this match."

Former West Indies player and Ireland coach, Phil Simmons, was not too disappointed with the result, even though he was hoping to see a better performance from his batsmen.

"We had a couple good days. I think we did well on a flat pitch to get them out for that score. They were going well at on point but we did well," Simmons said.

"Batting-wise, we also had a good run because two or three guys got 50s, but they are still getting acclimatised, we have only been here four days."

Simmons is now turning his attention to tomorrow's 50-over clash at Kaiser Sports Club in St Ann, as the team steps up its ICC World Twenty20 preparation.

"It's a good thing that the guys got a chance to run out and get some match practice in, but we know that we are here for the Twenty20 preparation and at this point it's all gears forward towards the Twenty20 World Cup and we are really looking forward to that," Simmons pointed out.