Rivoli at a loss following drubbing 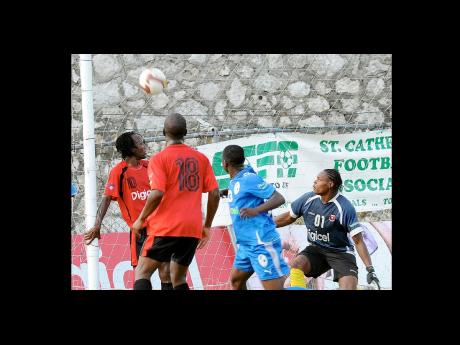 Rivoli's coach was at a loss for words following their 4-0 hammering by Sporting Central Academy in their Digicel Premier League match at Spanish Town Prison Oval on Sunday.

"I don't know what happened today," said Oneil Thomas of Rivoli. "If they had played according to instructions the result would have been different."

The loss denied Rivoli a place into the top six, but boosted Sporting Central Academy's chances of saving the drop. The Clarendon team will now play in the bottom six of the fourth and final round, and their coach, Vassell Reynolds, said his team finally lived up to expectations.

"We played as we should, " said Reynolds. "However, we converted four chances. I keep saying the team is too talented not to be winning matches; it is a morale-boosting performance."

Sporting Central outplayed the Monk Street-based team and was duly rewarded in the 31st minute when André Allen headed home for Sporting, who held their advantage to the interval.

It was 2-0 in the 61st minute when Watson rose high in the six-yard box to head home.

Rivoli were reduced to 10 men in the 65th minute when national player Devon Hodges was ejected for violent conduct (stepping on an opponent).

Before Hodges could cool off in the showers, it was 3-0 when a mix-up in Rivoli's defence was intercepted by Francois Swaby, who buried a left-footed shot in the 73rd minute.

It was total excitement for the travelling spectators when substitute Levaughn Williams blasted home from close range on minute 83, making it 4-0.