Haiti to use quake rubble in capital's rebuilding 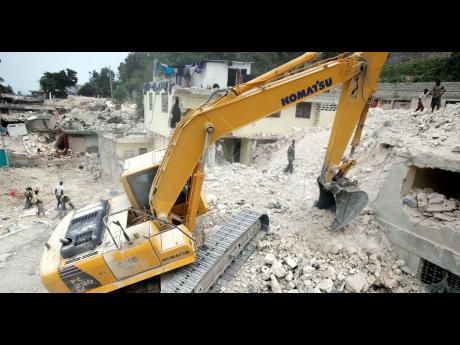 Earthquake survivors search in the rubble of a collapsed building as a mechanical shovel demolish the structure in Port-au-Prince, Friday, March 12, 2010. - AP

The rubble from Haiti's shattered capital is rising in heaps at the port, dumped for sorting and recycling by a fleet of heavy, exhaust-belching trucks.

A tangle of twisted metal and broken blocks, it's an eyesore for now.

But officials planning the reconstruction see only value in the debris - material to build roads, expand the waterfront and try to make Port-au-Prince better than before the January 12 earthquake.

About 90 per cent of the construction debris can be recycled.

Already, the rubble has been used to expand a jetty at the port and build ramps for heavy equipment involved in the clean-up.

"Debris ends up having a number of lives. It's not just to be gotten rid of," said Mike Byrne, USAID's senior debris expert. "The recycling of the rubble, and the potential uses of it, could become economic agents for recovery."

A large-scale cleanup is just beginning to tackle piles of rubble from the magnitude-7.0 quake, which generated 20 million to 25 million cubic yards (15 million to 19 million cubic metres) - enough to fill the Louisiana Superdome five times.

Trucks brimming with smashed concrete are now inching their way through the hilly, congested streets of Port-au-Prince.

While most roads have been cleared enough for cars to pass, drivers say the biggest problem now is the return of the capital's notorious traffic.

"I can only make three trips a day, two if traffic is really bad," said Lucner Jean-Philipe, who waited in the shade as a dozen men tossed the remnants of a collapsed university wall into the back of his Mack truck. The crew wore yellow Haitian government T-shirts saying "Let's Stand Up!" in Creole.

Jean-Philipe, a contractor for the US Agency for International Development, then drove from the Turgeau neighbourhood to the private port, passing French and Dominican trucks that other crews were filling with debris.

At the sorting facility, which receives roughly 80 trucks a day, workers separate rubble, rebar and wood by hand - occasionally finding human remains from the quake that killed a government-estimated 230,000 people.

Stanley Louis, a Haitian-American manager for the Miami-based PHS Group that is running the project on a USAID contract, said the Haitian government told him to bury the bones. He is keeping them in a tent in hopes of finding a better option.

Once sorted, the debris is expected to aid a government rebuilding plan that decentralises the country and eases congestion in the overcrowded capital.

One key use would be to fill in a waterfront promenade in Port-au-Prince, said Gerard-Emile "Aby" Brun, the chief government adviser on debris management.

"The loss by nature creates a window of opportunity to do things a better way," Brun said. "I am convinced it will be a better Port-au-Prince in the short term, within three to five years definitely."

With the rainy season approaching, Haiti's government and international donors are focusing on clearing drainage ditches, many of which had buildings collapse into them. Crews are also targeting rubble that endangers homeless people camped along riverbeds and other at-risk areas, Byrne said.

Some homeowners and private companies have cleared out their property, and American aid teams pledged to remove debris dumped by residents in the Turgeau neighbourhood to help them return home.

But Byrne said the demolition phase and neighbourhood-by-neighborhood debris removal will not begin until after the rainy season.

Scavenging has been under way from the beginning, with people picking through the ruins for bits of rebar and any other materials of value.

At a sorting facility beside the Cite Soleil slum, the contractor has dug trenches and put up razor wire around its boundary to keep people away from the piles of sorted metal, wood and rubble. Guards shoo away people who approach anyway through the swamplands.

Compared with other disaster responses, Byrne said debris removal in Haiti is complicated by its island location and the sheer scale of destruction in a city that often used weak, non-reinforced concrete.

He said crews also try to talk to residents in areas where they're clearing rubble because of the emotions tied to the ruined buildings.

"These were people's homes, their churches, their schools, their hospitals," he said. "We have to be sensitive."