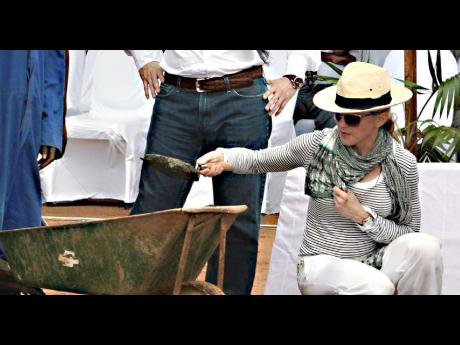 US pop star Madonna loads her trowel with cement prior to laying a symbolic brick at the commence-ment of the construction of her US$15m Raising Malawi Academy for Girls near Lilongwe yesterday. - AP

Madonna laid the first brick of her new girls' academy near Malawi's capital yesterday, in which she encouraged Malawian girls to "dare to dream," according to the inscription on the brick.

The pop star said it has long been her dream to build a girls' school. She said she hopes the girls attending the academy will go on to become doctors, lawyers and future leaders of their country.

The US$15-million Raising Malawi Academy for Girls is scheduled to open in 2011, and will assist 500 orphaned children.

At the same event, Madonna also launched a telecommunications and fundraising initiative that aims to provide education to children around the world by offering secondary-school scholarships and by supporting schools in developing countries in accessing the internet.

"Kids will be able to connect with kids from the other parts of the world," the singer said. "This will promote peace throughout the world."

Telecommunications giant Ericsson will donate computers to various schools in 11 African countries through the United Nations Millennium Village initiative, where model villages are established to demonstrate how the quality of life in African rural areas can be improved through community-led development.

The pop diva looked relaxed as she used a trowel to turn the earth. She wore a long-sleeved striped top, white cotton slacks, a patterned scarf and pale ballet flats. She also wore a black-banded straw hat and dark sunglasses on the sunny day.

Madonna arrived in Malawi on Monday for a week-long charity tour to inspect projects she established since her first visit in 2006 while filming a documentary on its devastating poverty and AIDS crisis.