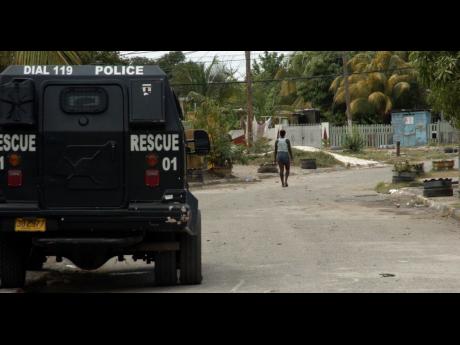 An armoured truck is used to oversee the fragile peace in Torrington Park on Wednesday, March 7, 2007. - file

Three years ago, the community of Torrington Park, situated in the Kingston Western Police Division, was in the midst of what many Jamaicans understand as a 'war'.

At its nadir, the 'war' led to people dying in the streets, houses being torched and residents' lives governed by lines not found on an official map of Jamaica.

The 'war' escalated over a three-year period - from 2004 to 2007 - claiming 60 lives between the communities of Jones Town and Torrington Park.

The tension in Torrington Park meant no one wanted to venture outside his house or around the community. Neighbourhood shops saw little business, while mothers feared for the safety of their children when they went to school.

This pall of death and division has, however, been lifted from the community, which is experiencing a rebirth of sorts.

According to numbers from the Statistical Department of the Jamaica Constabulary Force, there have been no murders in the community since the start of the year and none in 2009 and 2008.

Alex Thomas, who captained Jamaica in the 1999 Under-17 World Cup of football, testifies to this change.

"The violence was horrible, you know. It was very bad. Even how you see us sitting on the corners, we couldn't sit on the corners. They used to bore holes in the wall and fire shots through. So that meant anybody they see they shoot innocently," he said.

Shop owner Gracey, who didn't want to give her last name, said the process of peace did not come easily, but through the efforts of residents.

She says the benefits were also rewarding, as business was up because more people shopped at her store.

"Well, back in the day, the violence was very sticky, and when I say sticky, you know what I mean. I mean rough. We had a rough time, there was no business, because when you open, you have to open and be fretting, you haffi close back. My business was made of board and sometime shot come in it and you be fretful in them time there," she said.

The Peace Management Initiative (PMI) played a vital role in facilitating the peace.

Spokesperson at the PMI, Horace Levy, said the group's strategy was to get the different factions together. He explained that the PMI sought to get residents in different sections to begin talking to each other. By talking, he said, they would begin working out their differences.

He said the peace in the community now was part of a wider strategy for Jones Town, Torrington Park, Rema and Arnett Gardens. He also said the death of some of the main players contributed to a deceleration in violent activities.

Now that the peace is here, Thomas, who is now the assistant coach for Wolmer's Boys' School's Manning Cup team, says the residents are adamant they want it to remain. For it to last, though, Thomas wants resources to be invested in the youth.

"The younger youth are the next generation. I want them to get more jobs, to explore, so they can think for their families. The violence is over, right, but I want them to look at the bigger picture."