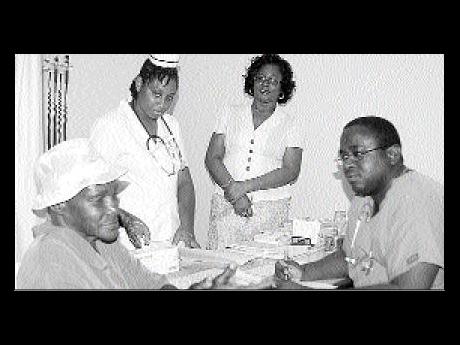 An elderly woman is attended to by Dr Kirk Moses (right), who is stationed at the Accident and Emergency Department at the Black River Hospital. Nurse Hazel Henry (second left) assists with the process while Patients' Affair Officer Cheryl Anderson looks on. - Contributed

Public hospitals are not strangers to harsh criticism, especially after the implementation of free health care in 2008 and the mad rush and service-delivery collapses which have ensued.

But the Black River Hospital in the St Elizabeth capital has received kudos for its customer service.

Evan Chen-Lyn, whose husband was hospitalised there for four months in 2009, described health care at Black River as "exceptional".

"The truth is, I didn't know that we had such doctors and nurses in St Elizabeth, and I would recommend them to anyone. I don't know that there can be a better service, anywhere," she said.

Her observation was corroborated at a recent monthly meeting of the St Elizabeth Parish Council, as Black River Mayor Jeremy Palmer commended the hospital's staff for their "humane and prompt" responses.

"On several occasions I have visited there, unannounced, to deal with relatives and persons who I knew had been admitted and, I must say that each time I am overwhelmed by the level of care that they give to patients," the mayor said.

Palmer called for fellow councillors to support the facility.

Councillor for the Siloah division, Audie Myers, said he, too, was impressed with the running of the hospital.

"The workers there, I would say, are a special set of persons who are motivated in what they do," he observed.

"And we have learnt to work with and offer the best care, with the little that we have. We seek, as much as possible, to be customer focused.

"Our customers are central to our work and, at all times, they must leave feeling that this institution is a place of care and professionalism," the CEO said.

Tourism stakeholders have put forward the idea of the hospital offering private health care to the growing south-coast hospitality trade.

"There was a private ward there, and if a group of entrepreneurs could finance a private wing, look at the scenery and the charming staff, it would take off," stated president of the Friends of the Black River Hospital, Eleanor Evans.

Brown said the Friends of the Black River Hospital group has provided valuable support, including a recent $2-million refurbishing of the male ward.

"They are quite a supportive group, and I am proud of my friends. They are involved in making our customers at ease when they come here and they offer gifts that are meaningful to us," she said.

"We felt that we could make a difference at the Black River Hospital and the community of St Elizabeth. When we see a need, we go ahead and try to meet it, that is how we operate," said Evans.

The hospital's site was used in the 18th century as an auction ground for slaves. In the early 19th century, the Royal British Army built barracks to house their men there. In 1856, the premises became the first site for Munro College.

The hospital is a Type C facility, which operates under the Southern Regional Health Authority. The 97-bed hospital serves just under 5,000 inpatients and more than 30,000 outpatients each year.

Through National Health Fund grants worth more than $50 million, the Black River Hospital was recently upgraded and equipped.