Throwers, jumpers did an excellent job 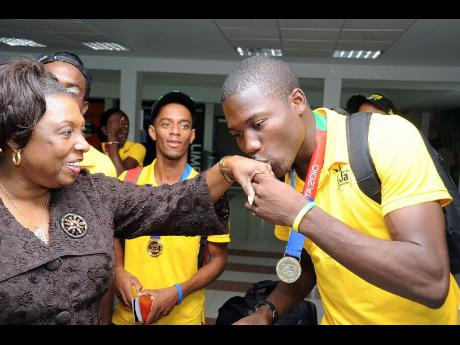 Johnathan Reid (right), gold medallist in the high jump at the just-concluded Carifta Games, kisses the hand of Minister of Sports and Culture Olivia Grange when she greeted Jamaica's team at the airport yesterday. - Ian Allen/Photographer 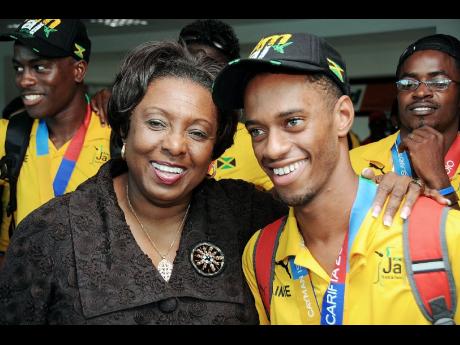 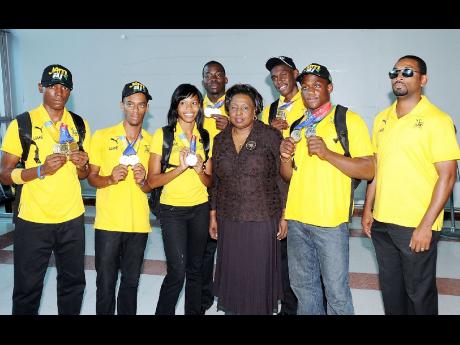 While impressed with the overall performance of the Jamaican team at the recently concluded Carifta Games in Cayman, head coach of the delegation, David Riley, was particularly impressed with the field events contingent and believes that signals a bright future for the country in that area.

Despite not dominating in the traditional bread and butter 100m sprint events - bagging only two out of a possible eight medals - Jamaica tallied an impressive 22 of their 72-medal haul in the field events. Eleven of the medals were gold.

"It was good to see the throwers and high jumpers in such good form, especially the Under-20 high jump. It is the first in a long while that we were winning that and it was a strong performance," Riley, referring to Shanice Hall's triumph in the girls competition, told The Gleaner.

"Overall, even though we lost some ground in terms of our medals in the sprints, the field events brought our tally back to what we were used to," added Riley.

"We didn't take our best team and some of the athletes did not run in their strongest events, but we were not surprised by any of the other countries, they came to win specific events and all things considered I think we could have had a much stronger performance."

The team members proudly displayed their medals, as they returned to a warm welcome yesterday, at the Norman Manley International Airport, led by Minister of Youth, Culture and Sports, Olivia 'Babsy' Grange.

The Minister lauded the athletes for their accomplishments and believes the performance further affirmed Jamaica's dominance in the sport of track and field.

"These inspiring young people have made us all proud. Winning the Games not only retains our hold on the title, but has strengthened our reputation as leaders in track and field," Grange said.

"The excellent performances of this junior team in the short and distance races, as well as in the field events, are good signals that Jamaica's future in track and field is assured."

The Minister also encouraged the athletes to take advantage of various scholarship opportunities that will be provided, as they look to continue their development in the sport.