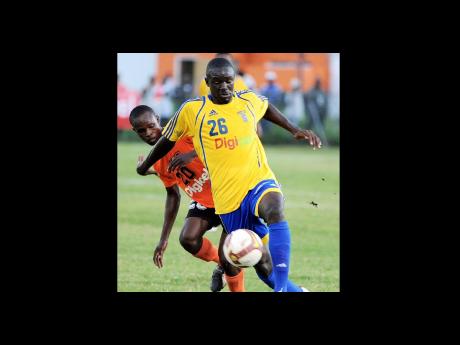 HARBOUR VIEW and national central defender, Dicoy Williams, says that now that he is back home from a one-week trial stint with Norwegian division one club Mjondalen FC, his main focus is to try and help Harbour View win the Digicel Premier League (DPL).

The 6' 2" 23-year-old, who in recent times has emerged as one of Jamaica's top defenders, was invited to the trial as a late replacement for another defender, who was also on trial.

However, despite impressing, the former Mona High Manning Cup captain, failed to secure a contract in time, before the March 31 transfer registration deadline.

He participated in several training sessions and played one practice match during his sojourn.

"I think that for the couple days I was there, I proved myself," said Williams, who was playing in Europe for the first time.

"In the match, I played right back in the first half, and in the second half, they put me in central defence. During the days when I was off, I went to the coach and he showed me on a blackboard the role of defenders in his team. It was a very good experience," he added.

The DPL is now entering its final round (five matches), with Harbour View leading the standings on 64 points, one more than Tivoli Gardens.

During Williams' absence, Harbour View lost 2-1 away to Village United at the Elliston Wakeland Centre. He returned to the east Kingston team's line-up last Sunday and scored in their 2-1 win over Arnett Gardens at the Anthony Spaulding Sports Complex.

"With their transfer window now closed, I plan to focus on Harbour View trying to win the championship. We have a good team and have a very good chance," he said.

Williams also spoke about the playing conditions at Mjondalen, compared to locally.

"Playing over there is kind of different from that of our local league. They play more physical and very fast. They don't have a lot skill. It's more man-to-man and physical, with a lot of long balls.

"They are also more professional and into the game and know what they want. They also talk about what they want to achieve for the season," said the former Santos and Arnett Gardens representative.

Williams, in the meanwhile, said while playing in the English Premier League is the dream of most young Jamaican footballers, his is to play in Italy's Serie A.

"My favourite place and ambition is to play in Italy. But as you can see, playing in Jamaica, you don't have a lot opportunity, so, if the door opens anywhere, you have to take it and hope to move from there."