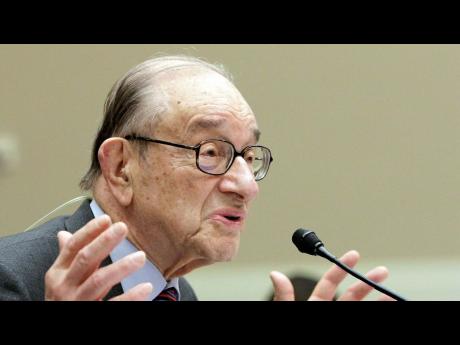 Alan Greenspan defended his tenure Wednesday as head of the United States Federal Reserve before a panel investigating the roots of the financial crisis.

As he has in the past, Greenspan disputed critics who say he kept interest rates too low for too long, encouraging risky lending.

Greenspan also hit back against criticism that his Fed failed to regulate high-risk loans to borrowers who couldn't afford the debt.

Many of those loans became the toxic assets that sparked the crisis.

But Phil Angelides, the panel chairman, referred to internal Fed documents in which staffers had recommended "broad prohibitions on deceptive lending."

Angelides said the Fed had issued guidance on predatory lending but had failed to regulate it.

"Why, in the face of all that, did you not act to contain abusive, deceptive subprime lending?" Angelides, a former California state treasurer, asked Greenspan.

Greenspan pointed to a series of actions he said the Fed took. Angelides countered that the Fed's actions covered only 1.0 per cent of the subprime lending market.

"You could've, you should've and you didn't" regulate the lending activities, he said.

WHERE THE BLAME LIES

In his opening remarks, Green-span blamed a litany of other parties and historical events for the meltdown but accepted no respon-sibility for himself or the Fed, which he led from 1987 until early 2006.

He said excess saving in developing nations left too much money in the system. And he said credit rating agencies undercounted the risk of mortgage investments.

He said the government policy of encouraging home ownership pushed Fannie and Freddie to create demand for risky loans.

Those firms play a vital role in the mortgage market by buying up mortgage loans and packaging them into bonds that are resold to global investors.

But Mark Zandi, chief economist at Moody's Analytics, said the Greenspan Fed's decision not to set national mortgage lending standards was a key factor in the housing bubble - far more so than Fannie and Freddie.

Zandi noted that countries like Canada and Germany with tighter regulations largely avoided the bust, while countries that followed the US model of light regulation fell into crisis.

"The Federal Reserve had that authority," Zandi said in an interview. "They just never acted on it. That was a clear policy decision."

"The aggressive monetary policy in the wake of the tech bubble contributed to the inflating of the housing bubble," Zandi said. "There's strong evidence that the Federal Reserve kept interest rates too low for too long."

Regarding his own missteps over his two decades as Fed chair, Greenspan said, "I was wrong 30 per cent of the time, and there were an awful lot of mistakes in 21 years."

He would not cite any specific failures, except banks' and regulators' collective failure to anticipate that so many challenges would hit the financial system at once.

Greenspan said future credit crises will be prevented only if banks:

are required to hold more capital as a buffer against future loan losses;

are forced to keep more cash-like assets instead of investments that can be hard to sell;

are required to hold more collateral to protect against default by other financial companies.

The 10 bipartisan commissioners later will grill former and current executives of Citigroup Inc about that bank's role in financing and reselling mortgage investments.

Greenspan's appearance opened three days of hearings by the FCIC.

The hearings are focused on high-risk mortgage lending and the way trillions of dollars in risky mortgage debt was spread through the financial system.

They are designed to provide a firsthand accounting of decisions that inflated a mortgage bubble and triggered the financial crisis.

The panel is using Citigroup as a case study because the bank was heavily involved in every stage of that process.

The megabank was a major subprime lender through its subsidiary CitiFinancial.

Other divisions of Citigroup pooled those loans and loans purchased from other mortgage companies and sold the income streams to investors.

As borrowers de-faulted, Citigroup took losses on mortgage-related investments it held on and off its books. Mortgage troubles at Citi, defunct investment bank Bear Stearns and elsewhere exposed cracks in the financial system.

In late 2007 and throughout 2008, those fissures grew into a full-fledged credit crisis that crippled the global economy.

The FCIC aims to dissect the bank's structure and show how its functions interacted. Wednesday's witness list includes current and former executives from Citi-Mortgage, parent company Citi-group Inc, and the division of Citi Markets and Banking that created the most notorious mortgage-backed investments.

Congress created the FCIC last year to examine the causes of that crisis. It is structured like the 9/11 panel that examined intelligence failures preceding the terrorist attacks of September 11, 2001.

Like that panel, the commission has authority to issue subpoenas to compel witnesses to testify or force companies to turn over documents. The commission is charged with examining 22 topics - from executive compensation to tax policy - in a report it must issue December 15.