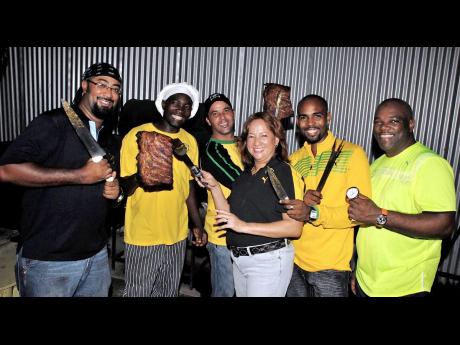 Hot on the heels of a sizzling and successful third season, Jamaica's premier invitational grilling event is back, bigger than ever. The 2010 Appleton Estate All Jamaica Grill Off (AJG) heats up for a culinary showdown on Saturday, June 12, at Hope Gardens, Kingston.

The 2010 AJG has evolved into a new dimensional format, designed to attract Jamaica's best recreational and professional grilling chefs for an elimination-style, winner-takes-all competition.

Today marks the official call for entries for the 2010 Grill Off, with no less than 20 pro, semi-pro and recreational grilling teams expected to compete, in both 'surf - seafood' and 'turf - meat' categories.

According to event director Craig Powell, "The Grill Off is all about 'Taste Jamaica, feel Jamaica', and the Appleton brand is the cornerstone of Jamaican libations and the true mark of Jamaican hospitality."

Judging will be conducted under the auspices of the Caribbean BBQ Association, with a select panel of culinary judges, with tabulations monitored by international auditing firm, KPMG.

A must-go for foodies, and fun-seekers, the event's offerings include unlimited sampling from competitors' booths and all-day music and stage entertainment. It will also feature a fully equipped, supervised 'kiddies' village and games area, face painting, balloon vending, pony rides, bounce-abouts and other family-oriented activities.

With just three years on the local culinary circuit, the All Jamaica Grill Off has already advanced to the international grilling arena with its debut in 2009 at the American Royal Barbeque. This is the world's largest and most prestigious invitational grilling competition held annually in Kansas City, Missouri.

Jamaica was the first English-speaking Caribbean country to be invited to this inherently North American grilling event, with team Jamaica competing alongside nearly 500 international grilling teams. The winner of this year's local grill off, is once again being invited to participate in both the Invitational and open categories of the competition in Kansas.

"So, if you think you can grill," says Powell, "don your mitts, fire up your spits, and get cracking for Kansas!"

The 2010 AJG has attracted major sponsorship from both print and electronic media houses, with The Gleaner Newspaper weighing in as the event's Official Print Sponsor.

The Grill Off has also earned endorsements from the Jamaica Tourist Board (JTB), Jamaica Trade & Invest (JTI) and the Caribbean BBQ Association, and several of Jamaica's leading food and consumer goods companies. These include Caribbean Passion, Reggae Jammin, Rainforest Seafoods, and Title Sponsor, Appleton Estate.