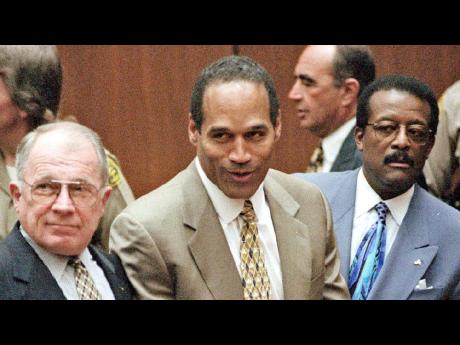 In this October 3, 1995 file photo, O.J. Simpson (centre) reacts as he is found not guilty of murdering his ex-wife Nicole Brown and her friend Ron Goldman, as members of his defence team, F. Lee Bailey (left) and Johnnie Cochran Jr (right, now deceased), look on. The suit, tie and shirt that O.J. Simpson wore on the day he was acquitted of murder have been acquired by the Newseum in Washington, DC. The clothing donation was announced on Tuesday, ending a dispute involving the former football star, Fred Goldman, whose son was killed, and Simpson's former manager who had the suit. - AP

THE TAN Armani suit, white shirt and gold tie that O.J. Simpson wore on the day he was acquitted of murder have been acquired by the Newseum in Washington, DC, for a display exhibit on the "trial of the century", the curator of the museum of news said on Tuesday.

"For us, it's a piece of news history that we will include in our collection of objects relating to the trial," said Carrie Christofferson, the curator who was involved in negotiations to obtain the suit.

Mike Gilbert, Simpson's former manager who has had possession of it, said he would fly to Washington and hand deliver the ensemble to the Newseum next week.

"I hope it will be displayed in a way that will help people ponder the legal system and celebrity," said Gilbert. "I'm happy that it will go somewhere where people can see it and remember where they were that day in history."

The acquisition ends a 13-year legal battle between Gilbert and Fred Goldman, the father of the man Simpson was charged with killing in 1994.

Both men claimed the right to the clothing Simpson was wearing October 3, 1995, when he was acquitted of killing ex-wife Nicole Brown Simpson and her friend, Ronald Goldman, after a televised trial that riveted the nation. The acquittal was viewed by millions on live TV.

Not appropriate for museum

Gilbert came up with the idea of a donation to a museum. He has kept the suit, shirt and tie in storage since shortly after Simpson's acquittal.

The suit was first offered to the Smithsonian Institution, but the museum said it was not appropriate for its collection. Gilbert said the Museum of Crime and Punishment in Washington also had been trying to acquire the suit, but the parties decided the appropriate venue was the Newseum.

Christofferson said it would be shown along with a collection of newspaper headlines, press passes, reporters' notebooks and equipment used to televise the notorious trial.

"It will help us tell the story of this massive trial of the last century," she said.

Goldman's attorney, David Cook, said he was pleased with the resolution in which no one will profit from the suit.

"People will ask me what Fred Goldman gets from this," Cook said. "It's not money, it's not vengeance. It's the enshrinement of the painfully inexplicable.

"It does further Fred Goldman's goals because it keeps the story in front of America and, to that degree, it's a success, as much as one can find any success in this terrible story," Cook said.

Simpson's attorney Ronald P. Slates said the former football star and actor, who is in prison in Nevada, was kept informed and agreed to the donation.

"We are very happy to have participated in this amicable resolution of this lawsuit," said Slates. "This is an important part of the history of American jurisprudence. This way, nobody profits and the American public gets to view a centrepiece of this historic event."

Ironically, Simpson, 62, is serving a minimum nine-year prison sentence in a case indirectly involving the suit. He was convicted of robbery and kidnapping in Las Vegas in October 2008 after a botched heist to retrieve his memorabilia he said was stolen by dealers. Witnesses said Simpson believed the suit was among the items offered for sale in a hotel room but it was not there.