Spurs beat Kings 95-86to tie for sixth in West 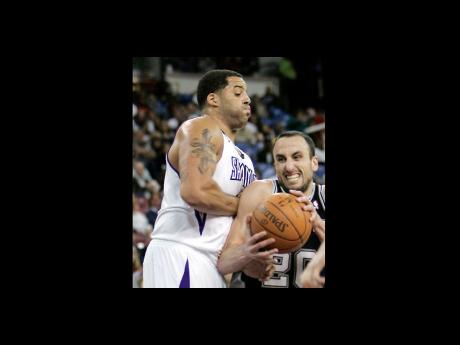 San Antonio Spurs guard Manu Ginobili (right) drives to the basket against Sacramento Kings forward Sean May during the second quarter of an NBA basketball game in Sacramento, California on Tuesday night. - AP

Even on a night when Manu Ginobili struggled through the first three quarters, the San Antonio Spurs looked to their feisty Argentine veteran to get going in the fourth. And just as he's done consistently since the NBA All-Star break, Ginobili delivered.

Richard Jefferson had 18 points and Ginobili scored 11 of his 16 in the fourth quarter for the surging Spurs, who beat the Sacramento Kings 95-86 late Tuesday for their fourth straight victory.

After entering the final period with five points, Ginobili made four of seven shots in the fourth, including all three three-point attempts to help the Spurs escape Sacramento with a victory and continue their late-season roll.

"I'm feeling really confident right now," said Ginobili, who has averaged more than 25 points over the past 16 games. "I couldn't make shots for three quarters, but I know the team trusts me. They ran some plays for me and I took some big shots and they went in."

Ginobili's three-pointer with 5:15 remaining broke a 79-all tie and began a span of 12 unanswered points by the Spurs. Another three by Ginobili several minutes later put San Antonio ahead 89-79.

The victory moved San Antonio into a sixth-place tie with Okla-homa City in the Western Confe-rence play-off race. San Antonio have won 16 of 21 and have five games remaining.