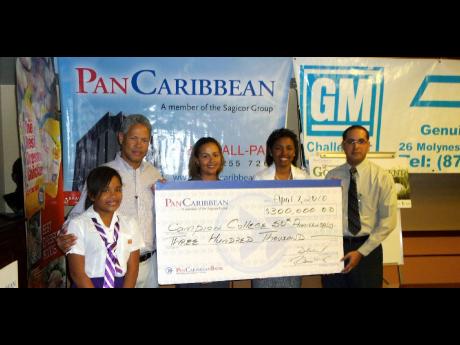 Local golfers will get a grand opportunity to win some wonderful prizes, including a brand new chevrolet avalanche, in Campion College's Anniversary Golf Tournament to be held on April 24 at the Caymanas Golf and Country Club, starting at 8:30 a.m.

The tournament, which is being presented in association with Pan Caribbean and is sanctioned by the Jamaica Golf Association, will have a two-ball better-ball full handicap format and is expected to feature 48 men, women and mixed teams.

Jodi Munn-Barrow, chairperson of the planning committee and the island's top female golfer, stated that she is expecting a fun-filled day while speaking at the press launch, which was held yesterday at the Sagicor boardroom.

"It is the first staging of our golf tournament for Campion and persons can expect a day of fun. We have fabulous prizes," said Munn-Barrow.

"I will be playing because as a Campion past student, I have to lend my support," she added.

Munn-Barrow also shared that there is also the possibility of the event becoming an annual one.

"We will look at the results for this year and if I know that we will still be getting the support for future years, I think we could look at it and maybe have it as an annual event, working with the alumni association," she pointed out.

The golf tournament is a major fund-raiser for Campion's development plan - the Vision 2020 Campaign - which has as its priority the construction of Jamaica's first library media centre, to be named the Jonathan Stewart Library in honour of the late son of alumnus, the Hon. Gordon 'Butch' Stewart.

It will cost persons $6,500 to participate in the tournament, while spectators will be required to pay $1,500.

The top prize on offer, which is a chevrolet avalanche, courtesy of GM Challenger Transport, will be driven away by one lucky golfer who hits a hole-in-one.

The best overall individual player will win a ticket on American Airlines to any United States, Canada, Mexico or Caribbean destination.

Flow is also offering a special prize of a HD PVR box and one month free HD services in a match-up between the top male golfer of the year, Jonatham Newnham, who is a third-form student at Campion, and the rest of the field for the closest to the hole on hole number three.

Other national representatives who will be on show include Robert Chin and Radcliff Nibbs, among others.

Donovan Perkins, chairman and CEO of Pan Caribbean, explained why his company decided to get on board with Campion as title sponsor of the golf tournament.

"It has two elements to it which we thought were interesting. One, it supports education and that's a thrust of our foundation; and two, a number of our executives were educated at Campion and they have been a big part of Pan Caribbean's success," said Perkins.

Perkins himself will be in action at the tournament and he, too, anticipates a lot of fun.

"I am a big amateur golfer, I have a long drive but that's about it and I putt well. But my chipping is awful, but it should be a lot of fun."