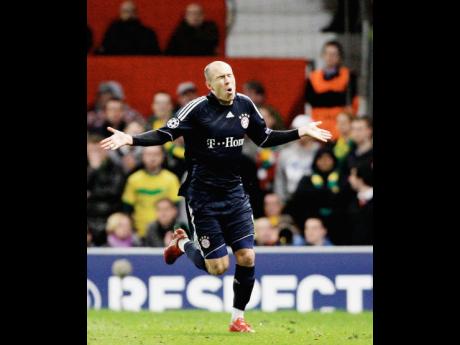 The final four of the Champions League won't feature an English team for the first time since 2003 after Bayern Munich ousted Manchester United yesterday, while Lyon reached their first semi-final by eliminating Bordeaux.

Bayern trailed 3-0 before losing 3-2 at United to draw 4-4 on aggregate and advance on away goals, becoming the first German team to make the final four since 2002.

Lyon also lost the return leg, going down 1-0 at Bordeaux but heading through 3-2 winners overall.

"It was an incredible comeback from three goals down," Bayern coach Louis van Gaal said. "In the first 20 minutes, Manchester United played us off the park, then we got back into the game with a great goal from Ivica Olic.

"At half-time, I was confident we could get back into the game and get the result."

Bayern host Lyon in the first leg of the semi-finals on April 21, with the return six days later in France. In the other semi-final, Inter Milan host Barcelona on April 20 and play in Spain eight days later.

Wayne Rooney made a surprise return for United after injuring his ankle in last week's first leg and he was involved in both goals as the hosts wiped out Bayern's 2-1 advantage inside seven minutes at Old Trafford after goals from Darron Gibson and Nani.

United played with 10 men after Rafael da Silva was sent off in the 50th for fouling Franck Ribery to receive a second yellow card. The Brazilian defender had already been booked for a petulant kick after being fouled by Mark Van Bommel.

With Rooney replaced after bursting a blood vessel below his right ankle, Bayern took control and Arjen Robben scored from a volley in the 74th to send the German team through.