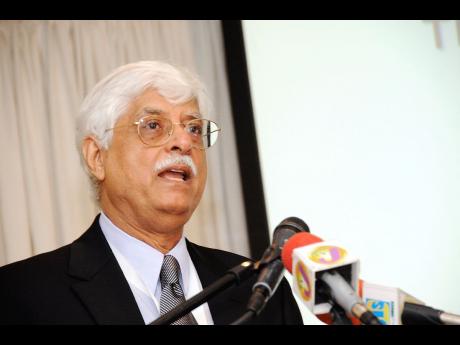 Zia Mian, director of the Office of Utilities Regulation, add-ressing the media at breakfast at the Knutsford Court Hotel on Thursday. - Ricardo Makyn/Staff Photographer

Independent power company, Jamaica Energy Partners (JEP), has landed a deal with the Office of Utilities Regulation (OUR) to build out an additional 65.5 megawatts of power supply to the national grid.

But OUR said Thursday that Jamaica will still need up to 400 MW more to maintain an efficient supply of energy for homes and businesses, and will soon be going to market with an offer to local and international companies to bid on projects.

The national grid is managed by Jamaica Public Service Company, which has a monopoly over distribution of electricity.

The OUR is looking to the World Bank for technical assistance to craft and evaluate the bid offers.

The agency said 290 MW would be required to replace old and inefficient generating plants.

"This should replace the old plants at Old Harbour, which have a high heat rate," Zia Mian, director general of the OUR, told the Financial Gleaner.

JEP outbid Jamaica Private Power Company, the only other bidder to prequalify from a field of four proposals submitted back in 2008 on the current project, he said.

Mian made the disclosure after Michael Bryce, director of Consumer and Public Affairs, announced during a media breakfast yesterday at the Knutsford Court Hotel that the JPS was hours away from signing a Power Purchasing Agreement for the 65.5 MW of supply.

"Notably, as we speak today, we are hours away from signatures being placed on an agreement, which will ensure the provision of an additional 60 megawatts of power," said Bryce.

"This 60 megawatts of power is an intermediary step in the acquisitions of bulk power as part of the design to reduce outages across the island," he said.

Hopeton Heron, deputy director general at the OUR, told the Financial Gleaner that the 60 MW was moved up to 65.5 MW in the final deal reached with JEP.

Heron said JEP would be building a diesel power plant on lands adjacent to the JPS Hunts Bay plant in Kingston.

"It will increase the installed capacity to the grid and enable JPS to respond better to the demand for electricity," said Heron.

The Financial Gleaner was unable to ascertain what the two-year gap and increased capacity meant for the project cost, nor when construction would begin.

Wayne McKenzie, general manager of JEP, said he would speak to those issues later, once the plans are finalised.

It is the largest private power provider to monopoly distributor JPS, producing 125 MW of power for the grid.

JPS and JEP have done business since 1995. Their PPA was last extended in 2006 for another 10 years.