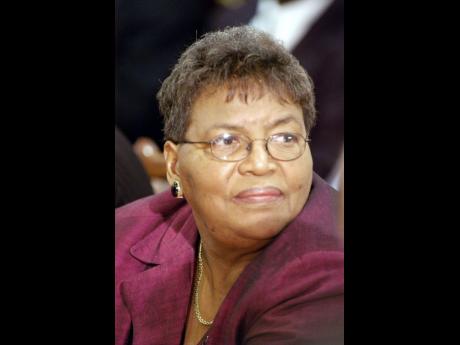 Shirley Tyndall was financial secretary at the time of Eagle's takeover. - File

Excerpts from Chapters Five and Six of former chairman of the Eagle Group of Companies, Dr Paul Chen-Young's, written testimony to the FINSAC enquiry.

With the exception of two directors - Paul Chen-Young and Os-wald G. Harding - none of the Eagle directors were major shareholders either through direct ownership or related companies.

There were 30 directors who served on various Eagle financial entities, creating what was probably the largest concentration of directors serving on any conglomerate in Jamaica and probably the Caribbean.

It was a deliberate strategy to invite such a wide section of distinguished and successful professionals and businessmen to serve so as to draw on their experience and talent to guide the merging eagle companies.

Directors always acted independently in exercising their corporate responsibility with frank and open - and sometimes heated - discussions at each monthly board meetings where no decision was taken unless it was unanimous.

With the exception of Eagle Merchant Bank (EMB) - the pioneering Eagle company - where I served as executive chairman, a strict line was drawn between management and the board of directors.

Directors set policies and management implemented a corporate structure that led to the success of Eagle financial entities.

In the case of Crown Eagle Life Insurance Company (CEL), where management strength was in marketing, I crossed the line as chairman by taking on executive responsibility for fund mobilisation based heavily on high-cost commercial paper and for the investments of the company.

Ironically, Crown Eagle failed because of my involvement in executive responsibilities that turned out to be strategically wrong in a turbulent and hostile investment environment. But I never acted on my own and all major decisions were discussed and approved by the board.

Directors of Eagle acted with the highest professional integrity at monthly board meetings and no major decision was taken without board approval and was so recorded in the minutes.

At the end, when FINSAC abruptly decided to take over the Eagle entities, it was a sad and moving moment when all directors attended a special meeting at which I told them of the disastrous turn of events.

On the important issue of the responsibility of directors, it is ironic that two of the most influential directors of the Eagle companies, Daisy Coke and Senator Oswald Harding, were to testify against me in court.

Their affidavits were very similar.

My attorney, Abe Dabdoub, argued in court that:

This argument seems not to have had any impact on how the case was handled by Justice Anderson. Based on their testimony in court, Justice Anderson described both Harding and Coke's testimony as "credible, clear and helpful".

An important issue for the Finsac commission to consider is the extent to which directors of the failed financial institutions should be held accountable, especially when the minutes of board decisions show their full participation and approval of decisions taken.

As the financial crisis escalated, proposals were submitted to Financial Secretary Shirley Tyndall and Dr Gladstone Bonnick, in his capacity as chairman of FINSAC, demonstrating the basis on which the Eagle group could survive.

There was no response from the financial secretary to any of the proposals. But there were extensive discussions with the chairman of FINSAC, to whom various financial plans were submitted and discussed, resulting in an understanding for a joint venture.

Before any discussions took place with FINSAC, Eagle looked at its financial problem and realised that it had to take action to survive.

In 1995, Eagle created a vehicle to restructure its finances and achieve viability. This was the Eagle Premium Growth Fund, for which a prospectus was prepared.

The vehicle created was a unit trust that included the most valuable assets in the Eagle group for its capitalisation. With the assistance of Eagle's auditors, KPMG, whose work the forensic auditors attempted unsuccessfully to discredit, Eagle created this fund to raise about J$6 billion, which would have paid off almost all of its high-cost funds. The viability of Eagle would then have been established.

It is to be noted that the much criticised Crown Eagle hotel at Manor Park was not included in the fund although monies raised wouldhave allowed the life insurance company to pay off its high-cost commercial paper that provided finance for the apartment condo building, given that vacancy rates at Manor Park apartments were virtually zero and there were other upscale high-rise apartments in Kingston.

The mistake was to have undertaken such a major project without enough pre-sales and then later convert it into a business-oriented hotel with the international chain of Crowne Plaza, which had a worldwide reputation.

Support for the Eagle Premium Growth Fund was sought from every public entity, including the cash-rich National Investment Fund, but none was forthcoming.

About the same time that the Eagle fund was launched, the Government announced an unlimited local registered stock issue, paying interest of around 40 per cent per annum.

It effectively killed the potential success of the fund. Neverthelesss, Eagle embarked on an aggressive advertising campaign and marketed the fund in every major Jamaican city and in major cities overseas with a strong Jamaican presence, such as Miami, Atlanta, Los Angeles, Washington, DC, New York and Hartford in the United States, and London and Birmingham in the United Kingdom.

Eagle did not raise enough funds to achieve its goal. But at least it made a major effort as the only Jamaican financial institution in trouble that devised and attempted to implement a public plan to solve its problems.

After that failure, and with knowledge of the impending crisis, in late 1996 and early 1997, Eagle met with Bank of Jamaica Governor Derick Latibeaudiere and his senior people to discuss its problems.

Initially, their response was not encouraging, as they wanted Eagle to raise equity on the local market, which was impossible at that time.

As the collapse became a very realistic possibility, the Bank of Jamaica (BOJ) responded more positively and this was reported in EMB board minutes of February 25, 1997 as follows:

"Mrs Coke, Mr Messado, Mr Hamilton, Mr Senior and Dr Chen-Young had met with BOJ ... . The meeting had ended on a constructive note, with management being asked to look at the future in three different ways:

2. The banking operations of ECB absorbing the profitable sections of EMB and EPBS;

3. The other entities in a separate group which would be dealt with by FINSAC on the basis of viability and if this was not possible, sale and recovery over a period of time. Government would have substantial ownership in exchange for the injection of J$5 billion approximately in share capital."

But this plan was not to be.

After the meeting with BOJ, various meetings were held in March 1997 with Dr Bonnick, with a view to negotiating a joint venture with Eagle in which Government would take a controlling interest.

"Directors were advised that the first meeting between Eagle and FINSAC was scheduled for this evening to be followed by negotiations tomorrow and it was expected that by weekend there should be an agreement."

Directors went to a meeting in April 1997 expecting to finalise an agreement on the joint venture that was agreed in principle with Dr Bonnick.

He arrived at the meeting with Ms Tyndall and a host of attorneys and then made the shocking announcement that the Government was taking over Eagle.

No reasons were given. No Eagle director, other than me, objected to the decision. After the meeting, the Daily Gleaner somehow got knowledge of the decision for FINSAC to take over Eagle and it made front-page headlines.

Nothing could be done after that to save Eagle.