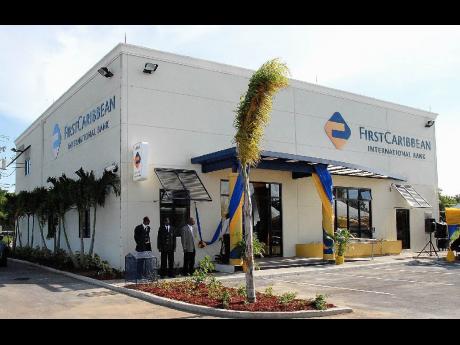 A branch of FirstCaribbean in Portmore, St Catherine. - File

Commercial banks are going head-to-head to grow revenues by reeling in more small-business operators to their suite of loan products with a recent flurry of credit cards targeting this category of business people.

FirstCaribbean International Bank Jamaica (FCIBJ) is the latest to have unveiled a suite of initiatives to drive business in 2010, having, as one of its main planks, a new FCIB-British Airways Business Visa card launched in March.

FirstCaribbean's new card will coexist with its platinum Visa card.

Clovis Metcalfe, managing director of FCIBJ, told the Financial Gleaner that the card, which carries an interest rate of 40 per cent, is geared at small and medium-size businesses and professionals and offers the added features of business expense management, improved cash-flow management, and access to credit for working capital.

Other features include access by cardholders to Visa Virtual Advisor, a free online tool for businesses to get information on financial and business management as well as on marketing their businesses.

Metcalfe noted that cardholders will enjoy a sign-up bonus, no annual fee, as well as 5,000 miles on British Airways.

The miles can be redeemed on participating partner airlines, including Caribbean Airlines, American Airlines and members of the Oneworld Alliance, which brings together 10 of the world's airlines,flying to almost 500 destinations in nearly 150 countries.

"The partnership with British Airways provides our credit card customers with a distinctly rewarding experience by offering them one of the best travel-rewards programmes in the industry with an excellent airline," Metcalfe said.

The bank has other plans for increasing revenue, including growing the loan portfolio by between five and 10 per cent, growing deposits by the same percentage, and increasing profitability via cross-selling, new products and services and further control of expenses.

Metcalfe had promised further cuts in consumer lending rates at his bank, which had already reduced interest rates from 23 per centto its current levels of 16.99 per cent.

Further reductions, including on commercial loans, will be coming in 60 days, he told the Financial Gleaner.

Metcalfe said, too, that a restructuring programme is being planned to compensate for reduced interest earnings. This is expected to go along with plans to increase business in several other areas, including small-business and credit card loans.

The banker did not give details of the planned restructuring.

The new credit card and companion products are intended to boost revenue growth in the coming year.

For the first quarter ended January 31, the bank's net interest income was $830 million, representing a marginal increase of $19 million, or two per cent, over the same period for the prior year.