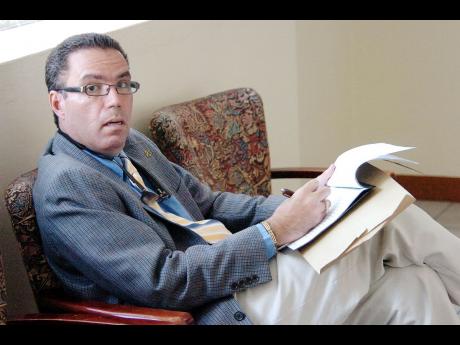 Information minister Daryl Vaz in the lobby at Parliament on March 24, 2009. - File

Cabinet has given its go-ahead for the drafting of amendments to cut down on penalties against late payment of income tax, and to clarify aspects of the general consumption tax (GCT) Act, a move the government hopes will make it easier for delinquent taxpayers to comply and clear their arrears.

Income-tax penalties will fall from 40 per cent to 20 per cent.

The changes to GCT will affect imported services. The amendments to the GCT Act will define an 'imported service'; specify the time of the supply of an imported service and the calculation of input taxes on imported services. It will also impose fixed penalties for 'improper display and handling' of the GCT certificate, and compel registration with the GCT commissioner by those who qualify under the law to collect GCT on their goods or services.

Information Minister Daryl Vaz, who made the announcement Wednesday at the post-Cabinet press briefing at Jamaica House, said the revisions to the law would also provide clarity on the application of GCT on one-off major entertainment events; and remove the disparity between the treatment of imported raw materials and the procurement of raw materials locally by manufacturers.