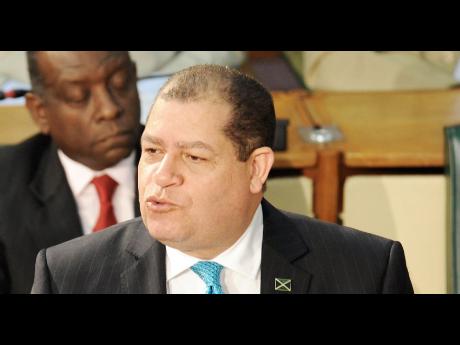 TEACHERS, NURSES, the police, soldiers and other civil servants will have to wait for at least three years to get all of the $13 billion owed to them by the financially strapped Jamaica Labour Party administration.

Already, the patience of nurses has run out, with some staying off the job, while teachers and the police have become more agitated, setting deadlines for the Government to state when sums owing to them would be paid or face possible action.

With the Government facing a potentially explosive situation, Finance and the Public Service Minister Audley Shaw yesterday sought to assuage the restive public-sector groups by appealing for "understanding, peace and harmony".

Opening the 2010-2011 Budget Debate in Gordon House, Shaw declared that the Government was unable to pay amounts due to public-sector workers this fiscal year, noting that those obligations would be met over a minimum of three years.

He told the country that the two-year wage freeze and the extension of payment to public-sector workers were part of the commitments made by the Government to ink the International Monetary Fund (IMF) agreement.

With this new timetable for payment, teachers who were owed sums from 2007-2008 financial year would now have to wait until 2013 to receive full payment from the Government.

"The Government has been working diligently in exploring all the ways in which it can meet some of these obligations without jeopardising our ability to meet our quarterly IMF test.

"We are near to the stage when we can engage in formal consultations with all groups and expect to do so within a matter of weeks, if not a matter of days," Shaw assured.

Agitated by alleged comments made by the leadership of the Jamaica Teachers' Association (JTA), Shaw went on the offensive, calling the remarks disingenuous.

"We hear dishonourable comments being made about apartheid and other things like that by the leadership of the JTA. It is dishonourable and unfortunate that he should be making comments like that," Shaw insisted.

Attempts to reach JTA President Michael Stewart for a comment last evening were unsuccessful as his phone rang without answer.

Hinting at a decent payout to nurses this financial year, Shaw said: "We are going to do our very best for the nurses."

Amounts due to public-sector workers this financial year