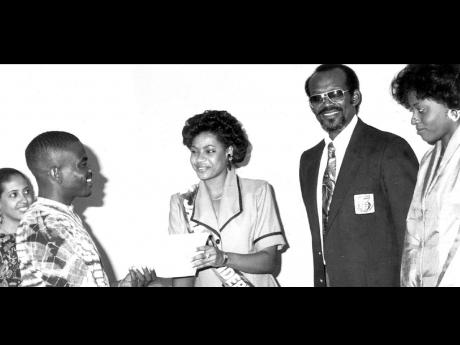 Dudley Stokes, who was editor-in-chief of The Gleaner Company for six years, died yesterday at age 73. His son, Dudley Stokes Jr, said his father passed away peacefully at the Golden Touch Nursing Home in Mandeville, Manchester.

Dr Stokes, who The Gleaner's Garfield Grandison hailed as an outstanding editor, succumbed to the debilitating Alzheimer's and Parkinson's diseases, which he suffered from for nearly 10 years.

Grandison noted that Stokes' exemplary contribution to media and education in Jamaica could not be overstated.

"He was a master of his craft, a thinker and a leader of no mean order. Many will credit him for their success acade-mically and otherwise," Gran-dison, The Gleaner's current editor-in-chief, noted.

"While we mourn his passing, we must also pause to celebrate the achievements of a great man," he said.

Chairman and managing director of The Gleaner Com-pany, Oliver Clarke, noted the wealth of knowledge and experience that Stokes brought to the team at The Gleaner during his 14-year tenure.

"He was always willing to share his expertise and was highly respected by his colleagues," Clarke said.

Stokes Jr said his father "was a man's man. He had the voice, the height. But he also had an integrity that I grew to admire."

In 1992, he was appointed to head the newspaper's newly created Human Resources Department. He retired in 2000.

Stokes succeeded Hector Wynter as editor. He assumed the post at a time when The Gleaner newsroom was making the transition from manual production (typewriters, linotype) to computers.

He entered journalism after a distinguished career in education and theology. Prior to joining the Gleaner staff, he had been a senior teacher at Cornwall College, St Mary and Calabar high schools .

Stokes was president of the Caribbean Association of Principals of Secondary Schools, chairman of the Private Sector Organisation of Jamaica's Committee on Education, a member of the Education Advisory Council at the University of the West Indies, and a member of the Prime Minister's Task Force on Tertiary Education.

A former minister of religion with the Baptist Church, Stokes was a former president of the National Council for Church and Social Action.

For his contribution to education, sports, religion and journalism, Stokes was awarded the Order of Distinction (Officer class) by the Government in 2008. He is survived by wife Veronica, three children, four grandchildren and three stepchildren.