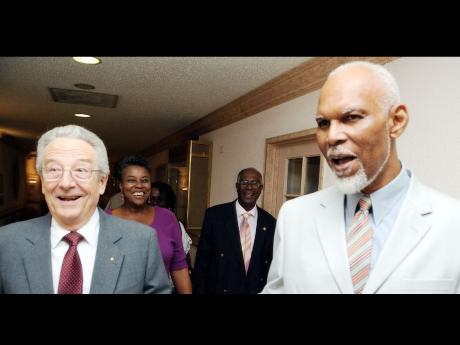 K.D. Knight (right) in discussion with Peter Bangerter of the Lions Club of Kingston at club's luncheon meeting at The Jamaica Pegasus hotel in New Kingston on Wednesday. - Rudolph Brown/Photographer

"This extradition request at hand has been badly handled, and it has given the impression to the public that it is being dealt with on a partisan basis and that is wrong," he said.

Coke is accused by the United States of being involved in illegal drug and firearm trafficking.

Knight believes that while the minister of justice, Dorothy Lightbourne, has the first and final say on extradition matters, the strategy she has taken has put Jamaica in a compromised situation.

Knight also dismissed the issue surrounding the statement being signed by John Doe saying that this has been the regular practice.

"... there is nothing peculiar about a request signed by John Doe and I don't think at this time that is a ground for refusal," he said.

Knight was speaking about the brothers Roger and Romeo Folkes who were ordered extradited by Resident Magistrate Stephanie Jackson-Haisley on Tuesday, who was satisfied that a prima facie case was made against them.

Knight, a former minister of national security, said that there should be a review of the extradition treaty. He said that members of the Bar Association should make a presentation to the Government and make their grouses about the treaty heard.