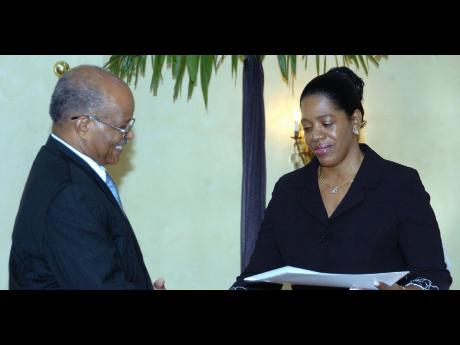 Cases for trial in the courts are being hampered by a shortage of paper to photocopy documents and statements to serve on defence lawyers representing accused persons.

This was one of the many problems in the justice system which Supreme Court judge Marva McDonald-Bishop outlined recently.

She made the disclosures shortly after she opened the Easter session of the Home Circuit Court which was marked with a colourful ceremony in Justice Square, downtown Kingston. The session lasts for 17 weeks.

The judge did not mince words when she said the justice system was in crisis.

She made a special plea for independence of the judiciary and called on the Government to give the courts its own budget so the courts can have its own resources. She said the Task Force on the Justice Reform had recommended that there was a real danger that the independence of the judiciary was being eroded, and so there was a need for steps to be taken to strengthen greater autonomy of the judiciary. She said until "we are able to deal with our own budget so we can have our own resources, justice will always be put on the back burner."

In calling for the speedy implementation of the recommendations of the task force, the judge said some of them had to be sharing chambers and she said the reality was that they did not have space to make their decisions.

"I would ask that the energy, time and money spent on the investigation of the justice system under the auspices of the task force do not go to waste and that the recommendations be given close attention and those considered acceptable and crucial to the smoother running of the justice system be implemented without delay," the judge said.

She said it was announced that the Government had purchased the National Commercial Bank building for expansion of the Supreme Court and called for steps to have it refurbished.

She called on the Government to pay the lawyers who were on the legal-aid list for their assignments since this was contributing to delays and the backlog of cases.

She disclosed that she had been to circuit courts outside of Kingston and had to send for lawyers miles away to assist the court. She said one of the reasons for the decline in the number of lawyers on the legal aid list was the long delay in being paid for legal-aid assignments.

The increase in the crime rate was blamed for the backlog of cases and the judge pointed out that when two cases were disposed, there were an additional 10 cases coming into the system.

Senior Deputy Director of Public Prosecutions Diahann Gordon-Harrison said murder continued to be the dominant offence on the court list. There are 428 cases on the Home Circuit Court list for trial this term and Gordon-Harrison described it as a very daunting figure.