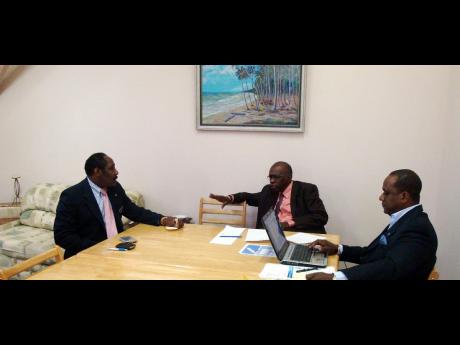 The JFF officials flew into Port-of-Spain Wednesday night at the request of Warner, who insisted that the JFF will weather the impending storm of financial uncertainty that surrounds its future, while adding that the regional bodies which he heads will lend a helping hand.

The JFF is currently facing a financial debt which has accumulated over successive years.

Earlier this month, the JFF diverted funds from its March wage bill in order to pay over $850,000 to a bailiff - intent on seizing company assets - as part of the £12,000 settlement ordered by a Central London County Court almost two years ago for outstanding fees due to the England-based NVA Management Limited.

This debt was incurred under the former JFF administration following a Jamaica versus England match.

According to a release issued after the meeting, the preliminary measure by the administration to protect the federation's assets resulted in the non-payment of several JFF staff members in March.

At yesterday's meeting, the football administrators explored a number of options aimed at transforming the current situation.

"It is imperative that CONCACAF and the CFU step in to assist the JFF. This is an unacceptable situation we find ourselves in. Despite this fact, we cannot allow our member to sink further into a sea of uncertainty. Football is a family. A common bond connects us. The growth of football in the region is interlinked and the survival and continued growth of the game in the Caribbean will be affected by how we handle this JFF situation," said Warner, who is also the president of the Caribbean Football Union .

Captain Burrell described the meeting as, "truly encouraging and hopeful".