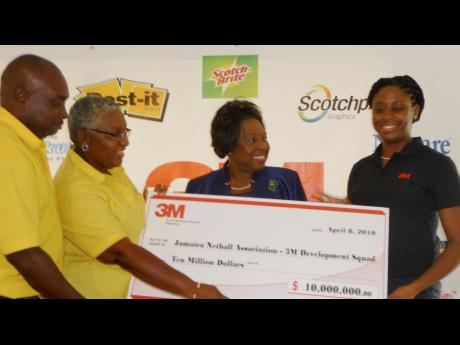 Shana Davis (right), sales and marketing manager of 3M Inc, hands over a cheque for $10 million to Marva Bernard (second left), president of the Jamaica Netball Association, at the netball team house in Barbican, St Andrew, yesterday. Also in the photograph are Minister of Youth, Sports and Culture, Olivia Grange (second right) and C. Lloyd Walker, coach of the development squad. - photo by Ryon Jones

Netball got a shot in the arm yesterday when 3M Jamaica announced a $10 million four-year sponsorship deal with the Jamaica Netball Association (JNA).

A large percentage of the money will go towards the funding of the JNA's weekend netball academies or camps as they were previously called.

This sponsorship represents 3M Jamaica's first venture into the funding of sports and Shana Davis, sales and marketing manager of 3M, explained why netball was chosen.

"The sport of netball has the enviable reputation of being competitive and exciting, without the negatives of drugs and indiscipline," said Davis.

"In keeping with those values, our netballers have always carried themselves with poise, grace and demonstrate true sportsmanlike behaviour; we are, therefore, confident that these ladies will certainly make excellent 3M ambassadors," she added.

The primary mandate of the 3M academy will be to produce fit, healthy and well-rounded netballers who will eventually replace the current crop of senior Sunshine Girls. The short-term goal, however, is the World Youth Netball Championship (WYNC) to be held in July 2013 when Jamaica will try to better their third-place finish, which was achieved in 2009. The development squad will, therefore, be made up primarily of players who will be eligible to represent the country in the next WYNC, which only caters for players who are 21 years old or younger in the year of the tournament.

JNA President Marva Bernard, speaking at the press briefing held at the team house in Barbican, St Andrew, is already looking forward to the girls coming out on top at the youth championship.

"We finished third in 2009 only by a fluke, we intend to win in 2013 and we have the ammunition and the goods to do so," said Bernard. "3M's investment in the development squad will ensure that we have a constant cadre of players to replace, when the time comes, our beloved Sunshine Girls," she added.

The monthly weekend academies will see the women not only being taught the art of netball but also life skills. Bernard said the aim is to prepare the players for life during and after netball.

The academy, which begins this Friday at G.C. Foster College, will be held in different locations islandwide, giving the coaches and management team the opportunity to seek out new talent.

There will also be a strong community involvement, as a match against a community team will be played on the last day of each academy.

Bernard, however, warned that it will not be a free for all, as the girls have to prove themselves worthy to remain in the programme.

"A girl will remain on the team only because of her skills, her attitude and aptitude."

Minister of Youth, Sports and Culture, Olivia Grange, who had stopped by to wish the Under-16 team all the best as they departed for the Jean Pierre Under-16 tournament, took time out to commend 3M Jamaica for getting on-board with the netball programme.