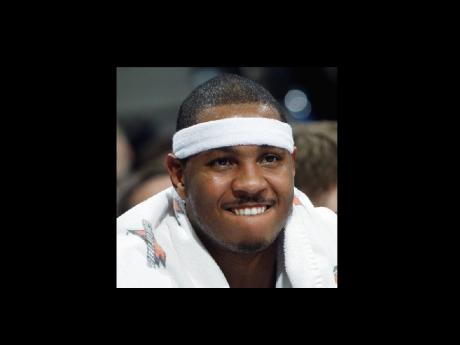 The Denver Nuggets charged back from a 13-point deficit to beat the Oklahoma City Thunder 98-94 on Wednesday, picking up a crucial road win in their NBA playoff chase.

Chauncey Billups scored 31 points and Carmelo Anthony added 24, as Denver held Oklahoma City without a basket for the final nine minutes while finishing the game on a 22-5 run.

The Nuggets are chasing the No. 2 seed in the Western Conference playoffs.

Thunder's Kevin Durant scored 33 points but missed a shot that would have tied the score in the final 10 seconds. Anthony followed that with two free throws to clinch it with 6.8 seconds left.

In Phoenix, the hosts stayed tied for second in the Western Conference by dominating San Antonio.

Brooks hit five 3-pointers and has 197 this season, a new franchise record.

Utah were led by Carlos Boozer's 18 points and 11 rebounds. The Jazz slipped to fifth in the West.

The Mavericks opened a three-game lead atop the Southwest Division and moved into a three-way tie for second place in the West.

Rudy Gay scored 23 points for Memphis, who lost their ninth in a row away at Dallas.

In Toronto, Boston capitalised on another injury to a Toronto player.

Following Chris Bosh's facial fracture the previous day, the Raptors lost Hedo Turkoglu in the first quarter Wednesday in a clash of heads that left the Turk with a cut nose and he was taken to hospital for a scan.

Rajon Rondo scored 21 points and Paul Pierce had 20 as the Celtics won their eighth straight over Toronto, sweeping the series for the second consecutive season.

Sonny Weems scored a career-high 21 for the Raptors.

In Orlando, Florida, Orlando boosted their chances of home-court advantage in a possible NBA finals series by thrashing Washington.

The Magic moved within a half-game of the West-leading Los Angeles Lakers in overall standings - a crucial stat if Orlando can make it all the way to the finals.