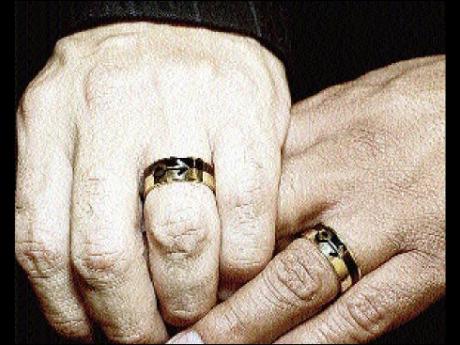 In this file photo from June 17, 2008, Eric Manriquez (left), and Juan Rivera hold their gold wedding rings together as they get 'married' in East Los Angeles. - AP

Although the Malay-language movie won't have explicit sex or even kissing, its screening would be a huge step forward for freedom of popular media in this Muslim-majority country that many fear is coming under the influence of Islamic conservatism.

Dalam Botol, or In A Bottle, centres on a man whose relationship with his male partner crumbles after he undergoes sex change surgery, said Raja Azmi Raja Sulaiman, who produced the film and wrote the screenplay based on the experiences of her friend.

"We are taking a risk," Raja Azmi, a long-time movie producer, said in an interview this week. "I'm very nervous. We still don't know if the censors will allow our movie to be shown in the end."

Penis in a Bottle

Raja Azmi submitted a preliminary script last year to the Home Ministry's Film Censorship Board, which verbally approved it after advising her not to shoot scenes of men kissing or being in bed together.

Censors also told her to change the original title: Anu Dalam Botol, or Penis in a Bottle.

The film's two leads had trouble "getting loose and comfortable in the first few days," but they adjusted to their roles before filming ended earlier this year, Raja Azmi said.

"We still shot scenes of skin-to-skin intimacy, with them hugging passionately," she said. "Without that, we wouldn't be able to show how much the characters really love each other."

Censors are unlikely to permit such scenes for Malaysian audiences, who are accustomed to bland, generic comedies and romances. Censorship-board officials declined to comment until Raja Azmi submits the film to them.

Malaysian censors have faced criticism for trimming or banning racy movies. Banned Hollywood films include Sacha Baron Cohen's Bruno, which the board said promoted homosexuality because it focused on a flamboyant gay fashion journalist.

The board recently revamped its rules, saying themes such as homosexuality would no longer be forbidden. However, the guidelines suggest filmmakers should rebuke behaviour that is considered immoral, including gambling, consuming alcohol and being sexually promiscuous.

Raja Azmi - who counts the Oscar-winning gay-themed Brokeback Mountain as a favourite movie - declined to speculate on whether censors approved her script only because it depicts bad consequences for its characters.

She stressed the movie was "a non-fiction tragedy about my friend."

It is possible that even a sanitised version of Dalam Botol may not placate some of Malaysia's conservative Islamic religious figures, who have pushed in recent years for yoga to be banned and people to be caned for drinking alcohol.

Sodomy - even consensual - is punishable by 20 years in prison. Prosecutions are rare, though the country's top opposition leader, Anwar Ibrahim, is currently on trial for allegedly sodomising a male former aide in what he calls a fabricated, politically motivated charge.