'They want to go home but can't' 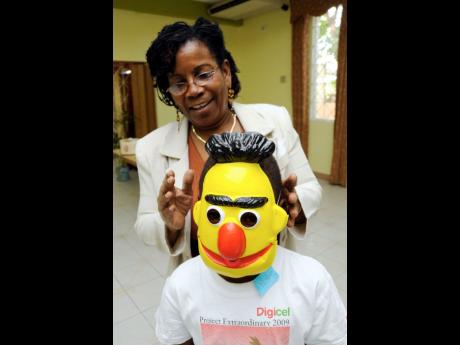 Shernette Smith, executive director at the Shirley Retreat Hotel, assists a ward of the Walker's Place of Safety with his mask during a treat put on by the hotel yesterday. - Ricardo Makyn/Staff Photographer

Twelve-year-old Lisaremembers being at the courthouse for a hearing and praying to God, asking to be able to go home to her mother.

During a treat yesterday, held at Shirley Retreat Hotel for the children at the Walker's Place of Safety, Shernett Smith, hotel director, led devotion and offered thanks for all the blessings the attendees had received.

"Going home is a blessing," the young ward said, "and I'm still praying to go home."

She stared off into space, shaking her head at her own unhappiness. She said she didn't know if her supervisors at the institution knew how she felt.

Walker's Place of Safety is normally meant for children who are victims of physical or sexual abuse, which includes incest. However, Lisa wasn't a victim of abuse.

"We can't send her home to her situation. Her mother has eight children and (Lisa) was spending a lot of time on the street, not going to school," said Stephanie McKenzie, superintendent at Walker's.

"Most of (the children) want to go home, but they can't," she said.

Lisa, who has been at Walker's for a year, said she stayed away from school when she could because students teased her. She lamented the day when a childcare officer arrived at her home with the police, as her mother was sending her to school the following day.

Just under 20 children, toddlers and pre-teens included, marched on the spot to songs such as Father Abraham and donned masquerade masks in preparation for the fun day ahead.

Lisa, who was looking forward to playing video games, said she was fine at Walker's despite her strong desire to be with her mother.

Superintendent McKenzie said the children got along, but were sometimes abusive to each other and the home's staff.

"We try and deal with it when it happens and take them in for psychiatric care.

"One just left (the treat) for counselling."