Silver Pen winner continues his call for a national team 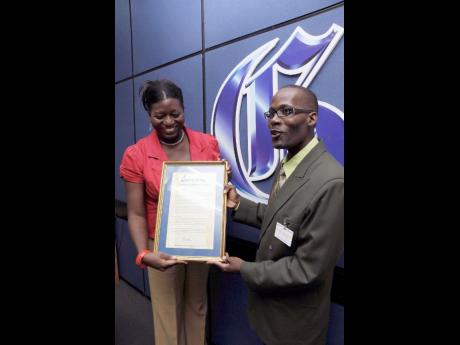 The Gleaner's managing editor, Jenni Campbell, presents a framed replica of the letter 'Importance of consultation and collaboration', written by minister of religion Orville Plummer (right) as part of his Silver Pen award for the month of January. - Norman Grindley, Chief Photographer

Minister of Religion Orville Plummer says a team approach is the ideal way to address challenges affecting the country.

The national youth and Christian education director of the New Testament Church of God of Jamaica and The Cayman Islands said he was concerned about the division between the various sectors, which has made the country dysfunctional.

"It doesn't seem we have the various sectors, including the Government and the opposition and other players ... and I believe if, as a country, we have everybody around a table as if we are playing a game, it would be good for the country," he said.

"We are not seeing that we are really at war in terms of the economy, in terms of crime, and I think if we are playing a game we need to have a sort of team approach."

In an interview on Thursday, Plummer said the approach should be evident at both the macro and micro levels in order to have total success.

"If all the players, the churches, the schools and other groups partner together, collaborate and consult, I think we would be able to solve a lot of the problems," he added.

He was adamant that for a change to occur in the society, there must be a concentrated and concerted effort among all players.

"The Government must lead a process in which all the major national stakeholders, including the Opposition, the unions and civic organisations, come together to develop a national consensus and national action plan," he said in the award-winning letter.

"At the community level, religious leaders, school principals, community-based organisations, political representatives, the police, and all other stakeholders must unite in developing strategies and programmes for community development and transformation. Consultation and collaboration must be the way forward. United we stand, divided we fall."