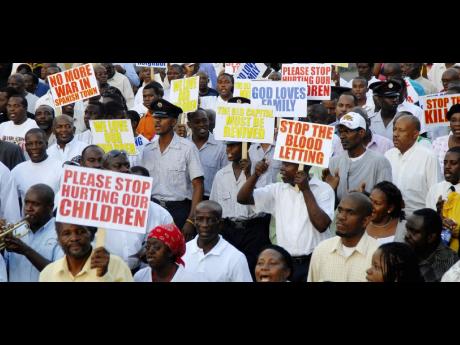 The 10,000-Man March follows memorable attempts at appealing to those who commit violence. In this 2009 picture, many people, mostly men, marched for peace in Spanish Town, St Catherine. - file

Church leaders in Spanish Town, St Catherine, are using an ambitious initiative, dubbed the '10,000-Man March', to send a strong message to criminals in the nation's Old Capital.

"This is where we have bought property. This is where we intend to raise our children. We have no intention of running away," said chief organiser, Bishop Rohan Edwards.

"No longer will we sit by and watch our town being destroyed! No longer are we going to sit down and say nothing! The good people are now retaliating," he continued.

The bishop explained that the concept of the 10,000-Man March was to get the "good men" to speak up since men were the main perpetrators of violence.

Edwards said the initiative had the support of the Spanish Town Ministers' Fraternal and the Spanish Town Revival, and had also garnered widespread support from the police, the business community and local schools.

Lamenting the increase in criminal activity in Spanish Town, Edwards said it was "very painful" to see children crying for slain fathers.

"Innocent people are dying in the streets and we are not at war," he said.

Police statistics for last year show that 343 people were reported murdered in St Catherine. Of that number, 101 were gang related.

"We want to know who the dons are - those who are not wanted. We want to see if we can transform that power that they have into something positive," he said.