Taylor not ready for clash 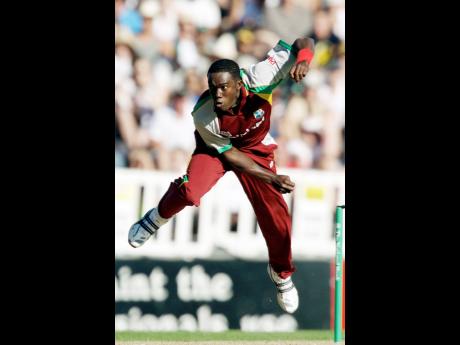 The West Indies' clash, which begins at 2 p.m., will be the feature game of a double-header, with host Jamaica playing Ireland in the opener at 10 a.m.

Jamaica will play Canada and the West Indies will take on Canada in another double-header tomorrow at the same venue.

Taylor, who missed the recently concluded regional four-day championship due to a back injury picked up in Australia late last year, was surprisingly included in the West Indies 15-man squad for the upcoming ICC World Twenty20 championship here in the region.

However, as it turns out, he is not fully ready, at least for today's game.

"We have brought in Bernard (David) in the squad as a replacement for Jerome Taylor, who will be unavailable for tomorrow's game," said West Indies coach Ottis Gibson, shortly after the team's training session at Kensington Park yesterday.

ironing out a few things

According to Gibson, the coaching staff will be working with 25-year-old Taylor to iron out a few things and the hope is that before the end of the festival he will be ready to play.

Bernard belted 102 for Jamaica against Ireland in the opening game of the festival last weekend, and 52 not out against Canada in their third game on Thursday.

Bernard, who is among several players on standby for the World Twenty20, will join stand-in captain Darren Sammy, Ravi Rampaul and fellow reserve Lionel Baker as the fast bowlers in the team.

The team's batting will be centred around the experienced Shivnarine Chanderpaul and Ramnaresh Sarwan, while Wavell Hinds, who was called up to the one-day team in Australia recently despite being overlooked for the subsequent Zimbabwe series, remains an option.

Missing in action from today's game will be regular captain Chris Gayle, Kieron Pollard, Kemar Roach and Dwayne Bravo, who are all on the subcontinent competing in the Indian Premier League; and wicketkeeper Denesh Ramdin, who is recovering from an illness and is expected in the country tomorrow.

"We do not have our our full squad, but it's a chance for players to put themselves in the spotlight," said Gibson.

He added: "It's an opportunity for us to set some game plans in motion as we seek to find the right combinations. But even while we plan to experiment we don't want to try too many things as this could disrupt our winning momentum from the Zimbabwe series.

"Ireland should be a good challenge as they have been performing relatively well at this format of the game in recent times and are coached by Phil Simmons. We will be taking them seriously," he noted.